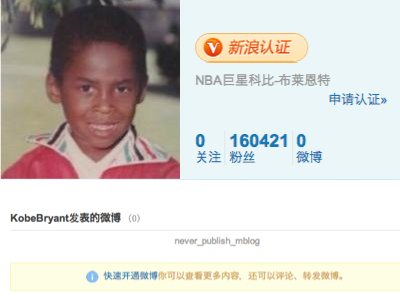 We’re not sure when this happened, but the Black Mamba joined Sina Weibo. He hasn’t posted a thing, but more than 160,000 people are anxiously awiting that first message (that number of followers is rapidly increasing, by the way).

The last time Kobe Bryant was in China, he did ridiculous things like score 68 points in 15 minutes of a glorified pickup game. People here have also been comparing him to Michael Jordan for as long as I can remember, so yeah, he’s popular. We all eagerly await his first post, and hope his sojourn on China’s Twitter lasts longer than Brad Pitt’s.

One of them — “Home of Kobe” — has more than 200,000 followers. Along with other sites, it posted a welcome message for Bryant and encouraged fans to leave comments for him by promising to help translate some of the remarks.