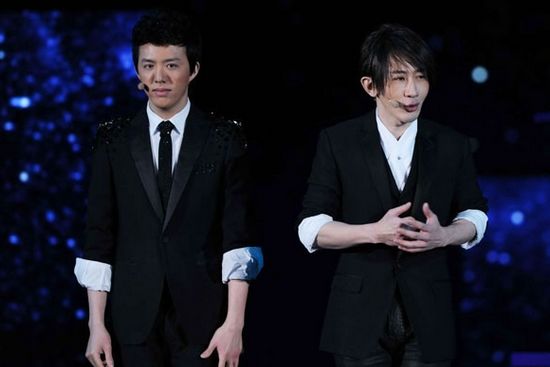 In the immediate aftermath of Taiwanese magician Lu Chen’s withering joke during the CCTV Spring Festival Gala — simultaneously seen live by millions, then re-watched over and over in the proceeding days, even after it got censored from subsequent reruns — we were told that all parties involved were cool with it.

Let’s revisit the incident. On February 9’s big CCTV show, Lu tried to make a joke that plays off the public perception that Li Yundi and Leehom Wang, two famous young stars, are gay lovers. Lu and Li were on stage for a simple disappearing trick when Li whispered something in Lu’s ear to set up a punchline. Lu’s quip, however, was extempore.

The audience gasped and laughed and cheered.

Leehom Wang, backstage, must have blanched. Multiple people wrote that they saw the pop singer, who was scheduled to appear in a separate act, slap Lu. The two publicly denied it, but the controversy continued. Lu’s camp said the joke was Li’s idea, while Li denied that. And then Leehom Wang unfollowed Li on Sina Weibo, and vice versa — but he still follows Lu.

We’re now finding out that the fallout runs deeper. On February 21, Lu’s publicist said the magician will not be appearing in tonight’s Lantern Festival Gala to mark the end of the 15-day Spring Festival. Reports Sina:

According to his agent during an exclusive interview with Chinanews.com, Lu has been so deeply vexed by the incident of late that he decided to “take a break” in the hope that he would be spared from future offense and criticism.

The agent denied that Lu’s exit was due to his poor relation with CCTV. He also appreciated the understanding and support by Ha Wen, the chief director of the upcoming gala.

Note to everyone: this is not how you handle a joke. Whatever happened to the idea that all publicity is good publicity?