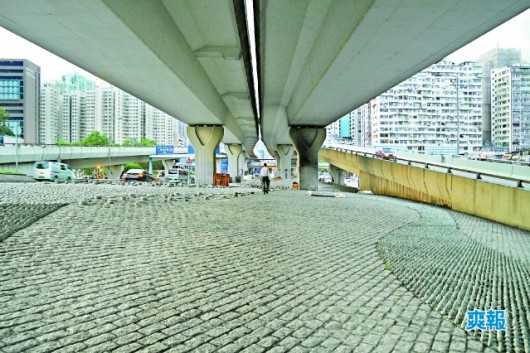 Hong Kong lawmaker Chan Yuen-han (陈婉娴) and some scholars have recently suggested converting shipping containers into temporary housing, youth hostels or art studios. These containers could be set up under the city’s nearly 2,000 vehicle flyovers and pedestrian footbridges. Ms. Chan believes the living environment of these shelters would be far better than the notorious “cage” or “coffin homes,” where many of the city’s poorest currently live. More than one seventh of the Hong Kong population lives under the poverty line, according to the latest Oxfam’s report, even though the average per capita GDP exceeds HK$266,000.

“For example, living under noisy flyovers may be a problem, but if you have lived in City Garden (one of the top 10 private housing estates in Hong Kong), then you’d know that City Garden is way noisier,” Chan said. “That means there’s something we can do (to handle the noise problem).”

Notice what Chan does not address: the thousands of homeless who currently occupy the spaces below these overpasses. What will become of them? This is a city that’s been known to spray down the areas where vagrants sleep several times per night, and to send officials to confiscate their personal belongings. Now the homeless are being forced to compete for territory with tenants of these proposed crate boutiques?

It’s understandable for the Honorable Ms. Chan to propose solutions for Hong Kong’s housing shortage. Everyone involved in this project, however, might want to think twice about it, or at least do some on-the-street research.