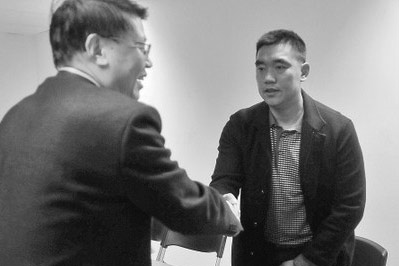 The CPPCC official who went ballistic after missing his flight in Kunming has been suspended from the mining company that employs him, according to People’s Daily. The better penalty may have already been levied though, in the form of shame: Yan Linkun, the deputy chairman of Yunnan Mining Corp, is now the face of airport meltdowns the world over.

On February 19, Yan and his wife and two 10-year-old sons were flying out of Kunming Changshui International Airport when they missed two flights. After the second one, in which the family didn’t hear a boarding announcement, Yan proceeded to trash the area around the gate, smashing computers and hurling fists and other body parts at windows and furniture.

The video, which we first posted on Saturday via Youku, has spread to the Telegraph, CBS News, Gawker, etc., putting poor Yan squarely in the Internet’s stockades. The CPPCC announced it has further punishment in store for Yan, who may also face criminal charges, but why bother?

Shanghai Daily has this quote from the now-contrite Yan, who’s pictured in the above picture (on the right) shaking hands with an airport official: “My irrational actions and rudeness have caused some losses to the airport as well as bad effects to the public, so I sincerely apologize to the airport and public,” he said to Wang Jinsheng, the airport’s deputy manager. “I am willing to compensate.”

You already have, Mr. Yan. And we thank you.