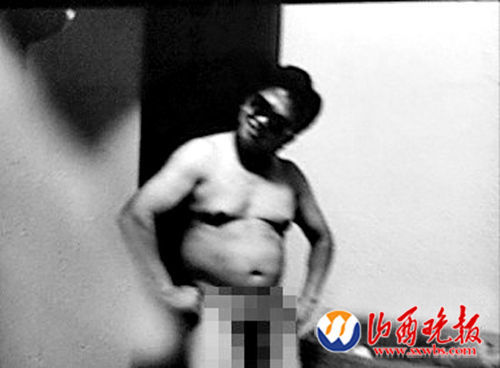 Here’s a political sex scandal out of Jiangxi province with an unexpected twist. Qu Wenyuan, a village-level party secretary in Nanchang, Jiangxi, was recently suspended after his girlfriend posted a naked photo of him on Sina Weibo. Shanxi Evening News reports that Hu Dandan (pseudonym) posted the picture possibly as payback for his “corruption and gambling,” evidence for which she claims to have.

Afterwards, Qu reportedly asked Hu to marry him. He “has since claimed that he was just trying to patch things up,” according to Shanxi Evening News.

The rest of the story, translated, as follows:

Both parties have admitted that they had been living together. Qu’s wife had passed away 10 years previously. He has since been suspended by the party committee of Liuhu Township, Xinjian County. A spokesperson for Xinjian County Party Committee said that the matter is currently under investigation.

Standing naked with his hands on his hip

On the evening of February 20, a photograph of Qu Wenyuan, party secretary for Guxi Village, Liuhu Township, Xinjian County, Nanchang, Jiangxi, began to circulate on Weibo. The photo showed Qu standing with his hands on his hips, naked but for a pair of sunglasses.

Weibo user “淑女也会想杀人” said that she has proof of Qu’s corruption and gambling, and is in possession of a number of other indecent photos. The “淑女也会想杀人” account belongs to Hu Dandan. She told the reporter that she used to be the manager of the Imperial Vacation and Leisure Center in Xinjian County. She met Qu in early 2012 when he visited the center for a foot bath. “At the time, Qu told me that his wife had been dead for several years and that he wasn’t seeing anyone. I had been divorced for more than ten years and I was eager to re-marry. He seemed reliable, so we started seeing more of each other.” They moved in together just over a month later and Qu bought a house in Xinjian County, Hu told the reporter.

The pair opened a restaurant together in April last year. Hu said that Qu liked to gamble and would borrow money from the restaurant when he lost. He would eat at the restaurant and then not pay his bill and didn’t keep records under his own name. “The restaurant was badly managed and he was borrowing money all over the place; I felt bad, so I started asking him to write promissory notes.” One of the notes from May 3 last year shows that Qu borrowed 80,000 RMB from Hu last year. The note clearly displays Qu’s identity card number. Hu said that all the notes were written by Qu himself, but that he later failed to acknowledge his debts.

Robynne is a writer, translator and Chinese graduate living in Beijing. When not on Twitter complaining about the weather, she can be found exploring the hutongs looking for the next hit Sichuan restaurant. She tweets @frommyplate.