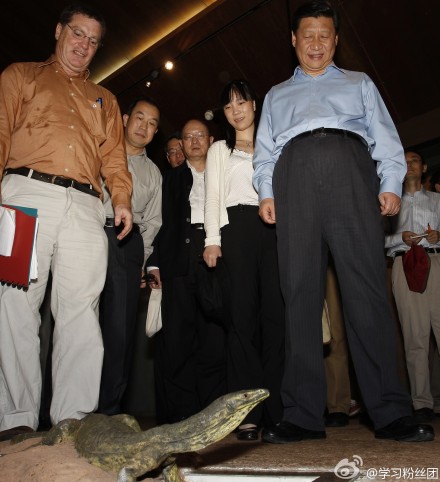 Um, delivering a doe. I said doe in this post, not Komodo dragon.

Xi Jinping has his work cut out for him to top this. We suggest, for his next act, helping deliver a doe in the fields. The hoi polloi will lap it up!

This picture comes Xi Jinping’s unofficially endorsed Sina Weibo account, Hao Hao Xue Xi (“Thoroughly Learn From Xi,” with a pun on “xuexi” [to study]). (Ed’s note: The better, more literal translation is “Study Xi Fan Club,” because the name of the microblog is actually Xuexifensituan.) It was posted at 11:20 am today sans comment. Needless to say, it doesn’t use the most flattering angle to capture China’s top leader — and for that, we love it, not because we want to see Xi meme-ified (inevitable), but because it’s such a refreshing change to see a CCP leader allow himself be depicted in a natural light.

The question of exactly who operates Hao Hao Xue Xi, by the way, remains a mystery, one that SCMP and the Telegraph both recently tried to unravel.

Judging by the first-hand images and accounts, many guessed the poster must be someone close to Xi, possibly a member of his team.

“This must be one of Xi’s guards,” said a netizen on Weibo.

“Stop confusing us,” said another. “When will this system be changed? It will be the only cure for China.”

The person, or persons, behind the account has said nothing on Weibo about his/her identity amid increasing attention and speculation. A self-introduction on the page reads: “This is the community for Xi’s supporters and fans. We never stop caring for Xi. You are welcome to join us.”

Professor Shi Anbin, a media studies expert from Tsinghua University, said he “did not buy” claims that Mr Xi was following in the footsteps of Barack Obama and David Cameron. “There is no such concept of ‘political marketing’ in China since we have a different political system,” he said.

Prof Shi said he expected Mr Xi, who formally takes over as president next month, to engage with Chinese internet users with annual online chat sessions and claimed the government had been “quite supportive” of online anti-corruption campaigns.

We’re not sure who the white guy is in the above picture, but he looks familiar. Drop us a line if you think you know.