Recently in Wuhan, a man bit “off” the finger of two people — an old man and a young boy – he randomly encountered on the streets. On Monday, that man, surnamed Zhao, 30, was detained in Huangshi, Hubei province.

Police wrapped what appeared to be a cloth muzzle around Zhao’s face: 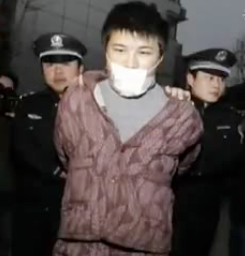 How many more fingers would this man have menaced? Thank goodness the world will never know… until he bites off the finger of the jail warden, fakes his death, hijacks the ambulance transporting him, and returns to a world that, much like himself — only incognizant of the fact — is insane.