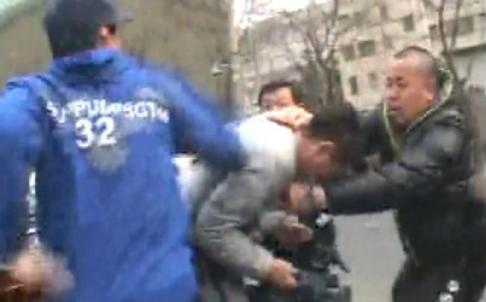 We last heard from Liu Xia, who is under house arrest, when activists pushed past security guards and filmed their brief face-to-face conversation with her on December 28, Liu Xiaobo’s birthday.

The latest incident involved TVB and Now TV cameramen who were filming Yang’s attempt to visit. Provocational journalism at its, ahem, best?

Yang’s whereabouts were unknown [Friday] night. A witness, a mainland activist who requested anonymity, said while Yang was waiting for a taxi shortly after 10pm a dozen men attacked him. He was taken away in a police car afterwards, the activist said.

Another activist, Hu Jia, posted on his microblog a picture he claimed to be the moment Yang was put in the police car.

Before Yang was taken away, he told the SCMP that security guards refused to let him register to see Liu Xia. It’s unclear what TVB’s Tam Wing-man or Now TV’s Wong Kim-fai did, if anything, before the guards began striking them, though it seems obvious that trying to push past guards — who, with their shitty jobs, probably aren’t the most tolerant and even-tempered people in the world — while wielding big cameras seems like a pretty good way to elicit a physical response, if that’s what you were after.

Resorting to violence is despicable, of course, and Liu Xia’s continued extralegal imprisonment remains a farce and a stain on the country that allows it.

Tam said he was punched in the face, then pushed to the ground before five or six men trampled on him. Wong said they pulled him and tried to snatch his camera, before hitting him in the head. He said his camera was damaged during the scuffle.

Along with TVB, Hong Kong delegates in Beijing for the Two Sessions have also issued statements condemning the attacks.

TVB issued a statement calling for the attackers’ arrest. It also urged the Hong Kong and Macao Affairs Office of the State Council to protect Hong Kong journalists’ safety on the mainland.

“Hong Kong treasures and respects freedom of the press. It is unacceptable for reporters to be attacked when they are doing their job legally, and [such action] should be condemned. It’s a pity for something like this to happen during the annual congress,” NPC deputy Ambrose Lee Siu-kwong said.