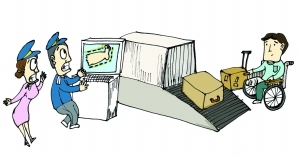 Huh. A man tried to check in a bag containing a real human leg, Guangzhou Daily reported on Tuesday. Unfortunately for him, the leg was spotted in the X-ray scan, and was seized by airport security.

“There are restrictions for transporting human organs by air,” reads the second part of the GZ Daily headline.

Midday yesterday (February 25), Baiyun Airport security personnel, to their great shock, discovered via screening that a traveler on his way to Chongqing had a human leg in his carry-on. Only after inquiry did they learn that this was the traveler’s own amputated leg; since local afterlife customs dictate a corpse be intact, he was bringing his stump home. But a hospital representative said hospitals usually don’t permit a person to take away his own limb. Because the traveler was unable to produce a hospital certificate, the limb was not permitted onboard.

The man, Mr. Huang, had stored his leg in a big icebox, which also — we presume — violates the regulation on maximum liquid volume.

Airport security said that according to regulations, passengers must obtain prior consent from the airport to transport body parts or living specimens, and must have the proper certificates from the hospital. Mr. Huang’s leg was not allowed because he lacked the paperwork. “I’ve been doing security check for many years, and I’ve never encountered something like this before,” said an airport employee.

There’s good news though: the airport, which obviously has no use for a leg, reportedly will mail the limb to Mr. Huang’s relatives. So now, the next question: what are the relevant regulations for sending a human body part via post?

We imagine the airport folk wiping their hands together, then splaying their fingers in the air. Buck passed. Problem solved.

We do hope Mr. Huang eventually receives his leg in one piece, though. And considering the strangeness of this story, we have to say it seems all parties handled themselves admirably.

POSTSCRIPT: We owe Brian Glucroft a beer for the headline pun, and Adam Minter for the story tip.

UPDATE: Also see: The Nanfang on this same subject.