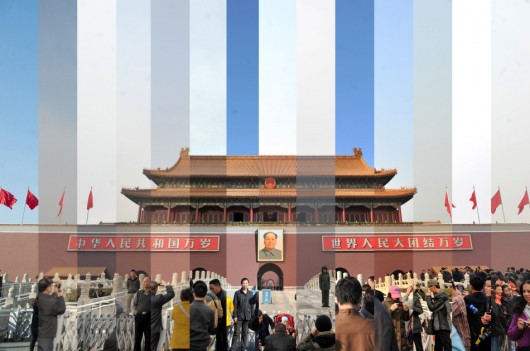 The concept is pretty simple — set tripod in front of Tiananmen every day throughout the Two Sessions; snap picture — but Wei Yao, the photographer for Beijing Review who got the shot you see above (along with this one), explains on Reuters’s Photographers Blog that it still took a lot of work:

Having the idea of how to do my project, I encountered some difficulties. Unlike the midnight sun in which shooting only lasted for a day, I had to reset my camera everyday at Tiananmen Square. I originally planned to shoot a picture from the same position at the same time of day, but in the meantime, I also needed to cover many other NPC assignments for my papers. Being in a rush all the time, I wasn’t able to get the same position or angle throughout the two weeks. Fortunately, after spending a long time editing, I still managed to create what I needed.

Wei was inspired by a similar mashup of images of nothern Europe’s midnight sun. The 14 shades of Tiananmen was posted on Sina Weibo after the NPC’s closing ceremony and was forwarded more than 25,000 times.

It was ranked as the second hottest microblog on Sina Weibo that day, outranking all the other subjects related to the NPC. From the reposts and comments, I could see more and more people showing concern and attention to the air quality in China, and I am more than happy to see my project achieve a greater success than my expectations.

The sky of Beijing (Reuters)