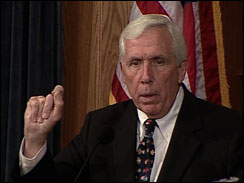 Rep. Frank Wolf (R-Va.) has officially accused Jiang, a Chinese national who had access to classified information at NASA’s Langley Research Center in Hampton, Va., of being a spy. As Wolf told Discovery News:

“What they did here potentially could be a direct threat to our country,” Wolf told Discovery News in a telephone interview. “The Chinese have the most comprehensive spying program in Washington that has ever been. They make the KGB look like they were the junior varsity or freshman team.”

The FBI appearently had been on Jiang’s case for a week, with Wolf first publicly outing Jiang on Wednesday, March 13.

Just last week, the FBI had opened an active investigation into whether Jiang, a Chinese national, might have violated the federal Arms Export Control Act, according to an FBI affidavit. But on Friday, agents learned that Jiang “was leaving the United States to abruptly return to China,” according to the affidavit, the contents of which were reported by The Daily Press of Hampton Roads, Va.

“Jiang told the Homeland Security Agent that he had a cellphone, a memory stick, an external hard drive and a new computer,” FBI Special Agent Rhonda A. Squizzero wrote in the affidavit for the arrest warrant. “However, during the search, other media items were located that Jiang did not reveal. Such items found include an additional laptop, an old hard drive and a SIM card.”

Spy thriller? You’ll have to use your imagination a little, but future screenwriters could do a lot with the scene in which Jiang’s pulled off his plane. The script remains unfinished, of course.