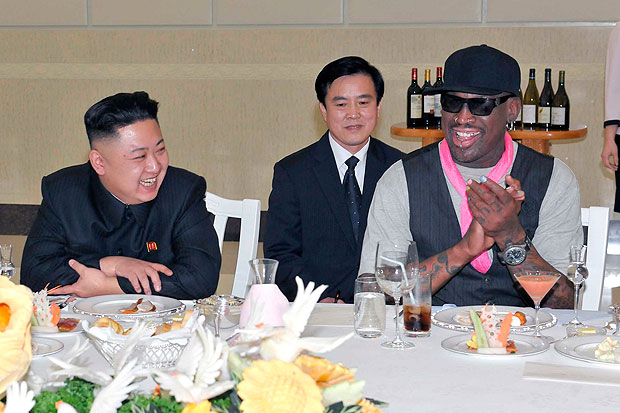 Kim Jong-un’s wife, Ri Sol-ju, gave birth sometime around New Year’s, but no one has yet to independently verify the sex of the child…

Thanks to Dennis Rodman.

In a long interview with The Sun in which Rodman says Kim isn’t like Saddam Hussein, “doesn’t want to kill anyone,” and “is just a goddamn kid” who’s “a cool guy,” he also dropped this nugget about Kim’s wife, Ri (emphasis mine):

“She’s a beautiful woman, very elegant and quite tall for a Korean — maybe 5ft 5in… She kept talking about their beautiful baby daughter.”

The paragraph after, he notes:

“I won’t tell you if the toilets were made of gold or anything like that, as I promised Kim I wouldn’t talk about that stuff. There is a lot of stuff I can’t talk to you about.”

Apparently he missed the memo that the gender of Kim’s child was one of those things he couldn’t talk about. No one can, as Ri’s entire pregnancy was basically a secret — though an open one, once North Korean officials let her make a public appearance with a big belly. The sex of her child, however, has always been a classified information.

While North Korea has never officially confirmed the news, South Korean intelligence services “confirmed” that Ri Sol Ju had a baby in late 2012. Speculation that the baby was a girl has been circulating on the South Korean internet ever since, but today’s development marks the first time it has been corroborated by an independent source.

“If it was a boy, [the North Koreans] would have made an announcement,” Michael Madden, author of NK Leadership Watch said. A boy would be seen as a more viable heir to the North Korean “throne” in the event of a fourth generation leadership transition.

Obligatory disclaimer about The Sun being a Rupert Murdoch-owned tabloid, so maybe they just made up the quote, etc.