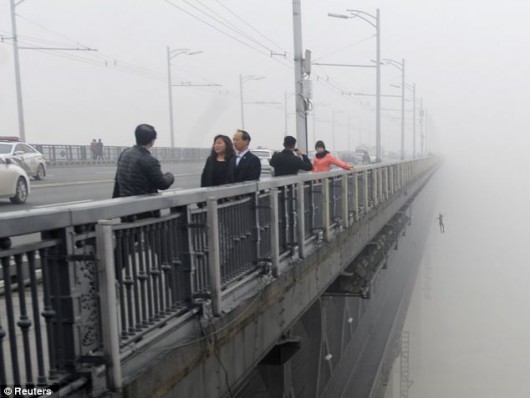 Suicide caught on camera, via Daily Mail: “The photographer had been standing on a viewing platform ready to take a snap of the fog shrouded bridge across the Wuhan Yangtze River in Wuhan, at Hubei province in central China.”

Fuel surcharge in Beijing back up to 3 yuan. Though a day as nice as today, why spend it in a cab? Links time.

Perspective for expats. “Over the past few weeks, I’ve been thinking of her attitude, and how it contrasts with the spoilt, privileged whining of so many expats. I don’t want to paint with too broad a brush here; most of the expats I know are splendid, stout-hearted, generous people. But there’s an undercurrent of stubborn assholedom that sours the whole business.” (James Palmer, TimeOut Beijing)

China needs a name for PM2.5 particles. “According to Xinhua News, the official news agency of China, the country’s National Committee for Terms in Sciences and Technology plans to give an official Chinese name to PM2.5, a Western term that has become an extremely high-frequency word in China in the past year.” (Offbeat China)

An execution on CCTV, not really. “For those familiar with the version of China gossiped about by grannies in Florida getting their hair done, that might seem conceivable. But for those familiar with the actual China, that proposition should sound completely absurd. // Contrary to popular belief, The People’s Republic of China has rarely put their executions out on display (vigilante Cultural Revolution killings aside)…” (Eric Fish, Sinostand)

From a North Korean scholar. “There is perhaps a message to the US, as the Rodong Shinmun article was full of soft phrases hoping that the two countries could continue sport exchanges such as this one and how enjoyable friendship could be between Koreans and Americans. Unfortunately, most of these were Dennis Rodman quotes, somewhat but not totally dampening the effect of the article: had it been a high-level Korean making such comments, one could construe it as a form of outreach to the United States.” (Dray Abrahamian, Choson Exchange)

The poop story you were waiting for, maybe. “Every week, it seems like photos of someone, often little kids, crapping in public appear online in China. This usually creates all kinds of havoc, often with people criticizing the parents (or grandparents) for letting the kids do their business in a public place. But why does it keep happening?” (Kotaku)

Famous author on censorship. “When it comes to censorship in China, the primary factors are often economic, not political. Publishing houses that were once government financed have operated as commercial enterprises for years now. Editors are under pressure to make the biggest profit they can. Even if a book carries some political risks, a daring editor will take the gamble if there’s a chance it will be a best seller.” (Yu Hua, NY Times)

All too predictable. “The successful, low-budget Chinese comedy Lost in Thailand has lured tens of thousands of Chinese tourists to Chiang Mai, but they left locals in Thailand’s historic and culturally rich northern city complaining. // After seeing a record number of Chinese tourists over the Lunar New Year holiday, some locals described what they experienced as ‘cultural clashes,’ others simply found the visitors’ behaviour disturbing and rude.” (SCMP)

This project was always too ambitious to be possible. “So where is the world’s tallest building? Apparently still in the factory in pieces. According to Oriental Outlook magazine (in Chinese), authorities in Changsha have withheld permits for Sky City because of concerns over safety, congestion and environmental impact.” (Forbes)

North Korea has not completely warmed up to the Dennis Rodman-led United States. (Washington Post)

Infographic on how the Great Firewall works. (Tech in Asia)

And another one! European football clubs battle for Chinese fans. (Tech in Asia)

Interview with Li Yundi, that pianist. No mention of Leehom Wang. (Jing Daily)

Home-brewing in China and mainland. (WSJ) 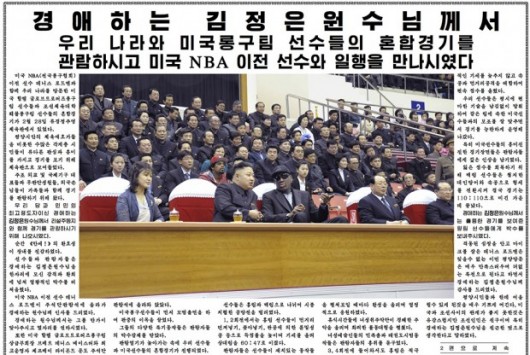 2 Responses to “Friday Links: Eerie suicide on camera, a televised execution (not), and an infographic on the Great Firewall”