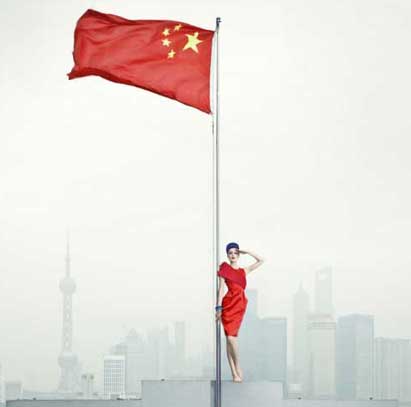 It’s the political season in China, with the dual National People’s Congress (NPC) and Chinese People’s Political Consultative Conference (CPPCC) swinging into annual two-week sessions. The period is normally a huge gift-giving event and a tremendous boon to the luxury goods industry. Businesspeople hoping to curry favor with officials shower them with preposterous presents, from overpriced cigarettes to “Gucci handbags, Hermès scarves, Montblanc pens and $30,000 diamond-studded Swiss watches” so ostentatious they would make Kim Kardashian blush, as New York Times reported a few years back.

But vigilante netizens have begun to expose the conspicuous consumption of particularly brazen officials, and top leaders seem increasingly concerned about the light such tawdriness casts upon the supposedly communist ruling party of a very unequal country. They’ve banned public spending on luxury goods, and more recently, according to CNN, stopped “advertisements for luxury products on… official state radio and television channels,” a move that immediately lowered the share prices of Burberry, LVMH, Richemont, and Chow Tai Fook (a Hong Kong-based jeweler that seems to specialize in huge pieces of gold).

Between official anti-corruption and frugality campaigns, luxury gift-giving might appear to be down this year, but some expect “the gifts to eventually be given, but very carefully and only once the campaigns slow down,” as Bill Bishop writes. All of this makes this blogger reflect that, Bourdieu notwithstanding, if China’s aristocracy had not been completely wiped out by revolution, perhaps there would be someone around to point out how ridiculous and unnecessary all this is.

Classism is nothing to be blasé about. Ethically and economically there is nothing more antithetical to human progress than the idea that who your parents are is more important than who you are and what you have accomplished. At the very least, however, old money helps expose conspicuous consumption for what it is, the lurid exhibition of wealth. The ultimate guide to American old money, The Official Preppy Handbook, for example, recognizes that wealth is not for flaunting: “Mummy may have inherited a king’s ransom in sables, but she prefers to wear her four-year-old ski parka.”

While this ethos of not flaunting one’s wealth seems sadly absent from contemporary Beijing, it was evident in the scholar-gentry class of Imperial China. The scholar-gentry prided themselves in, for example, having the good taste to prefer simple and elegant Tang Dynasty writing implements to newer and flashier gilded ones. But the Cultural Revolution and the harsh equality of the Mao years put an end to that. This means that there was no old money class to provide an example for the nouveau-riche. Couple this with nearly three decades of double digit GDP growth and you have the perfect recipe for mixing “expensive first growth Bordeaux with Coca Cola.” Obvious parallels could be drawn with the situation in Russia.

Of course, “good breeding” hardly prevents corruption. But the overconsumption of ostentatious luxury goods fuels graft by forcing Chinese officials to keep up with the Zhangs. A cornerstone of combating official corruption is to make sure that civil servants receive adequate salaries that provide a secure, if plebeian, middle-class lifestyle. This does not happen in China, where top leaders earn around $22,000 a year and judges (crucial targets for corruption) in China’s poorer inner provinces make as little as $2,000 a year. But if Chinese officials feel the need for yet one more $15,000 Swiss watch, then not even substantial salary increases would allow them to live within their means.

In the Qing Dynasty, wealthy Manchu princes, considered somewhat useless as they possessed neither the horsemanship of the Manchu solider nor erudition of the Chinese official, were known as the “children of the Eight Banners (八旗子弟).” Today, the term is sometimes used to refer to the Princeling Party (sons and daughters of communist high officials) whose increasing dominance of China’s politics puts them at the heart of ostentatious corruption. But at least the Manchus would have had a class of scholar-gentry to look down their noses at princelings speeding around Beijing in $260,000 Ferraris.

John Wagner Givens is a researcher at Louisville’s Center for Asian Democracy and contributor to The Durian. He also writes for the Huffington Post and tweets @JWagerGivens.