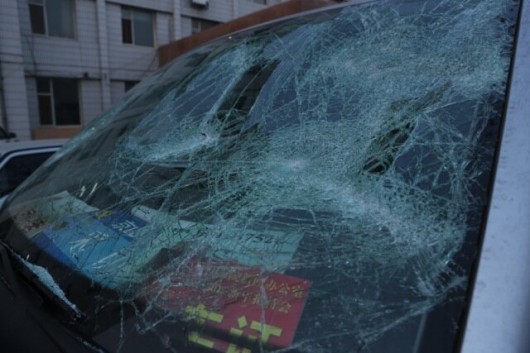 The Foreign Correspondents Club of China recently got wind of an assault on a German TV crew yesterday in Hebei province and published this statement:

The crew, belonging to ARD television, narrowly avoided serious injury when two men attacked their vehicle with baseball bats, shattering the windscreen, after a high speed chase down a major highway near the city of Sanhe, 50 km east of Beijing.

ARD correspondent Christine Adelhardt, accompanied by two German colleagues and two Chinese staff, had been filming in the village of Da Yan Ge Zhuang for a report on urbanisation, one of the incoming Chinese government’s major challenges and a process that has often provoked disputes over land ownership.

“We were filming the village square, where you could see old style farmers’ houses next to a newly-built mansion behind a wall and high-rise buildings in the background,” said Adelhardt, when a car drew up next to them. The car’s driver began filming the TV crew.

When the crew left, two cars, later joined by at least two others, gave chase, trying to force the Germans’ minivan off the road and to deliberately cause a collision.

“Deliberately cause a collision.”

They forced the ARD driver to stop at one point, whereupon five or six men surrounded the car, attempted to get in, and hammered on the windows with their fists.

You get the idea. Eventually the police get involved, but…

The crew then came across two motorcycle policemen and asked them for help. Their pursuers caught up with them, and again began smashing and punching holes in the car’s windscreen, despite the police officers’ attempts to control them.

Eventually, police reinforcements arrived, and escorted the ARD crew to a local police station, where Adelhardt and her colleagues were questioned. Adelhardt saw a number of the men who had attacked her car at the police station, but was not sure whether they were detained.

Meanwhile, the crew has gotten mixed messages about how authorities are handling the incident.

When she asked to file a charge of attempted homicide, she was assured by a local official that such charges had already been laid against the men.

But a policeman told her that the investigation had found that villagers had been “offended” by the TV crew’s presence and that they should have asked permission to film.

The picture above was tweeted out by Andreas Cichowicz, a former ARD correspondent, with the accompanying message (roughly translated from German), “This is how the German team’s car came out after the attack by thugs!”

That windshield damage was obviously not just the work of “fists.” We can’t wait to see ARD’s footage, pre- and/or post-chase. During chase? We can only hope.