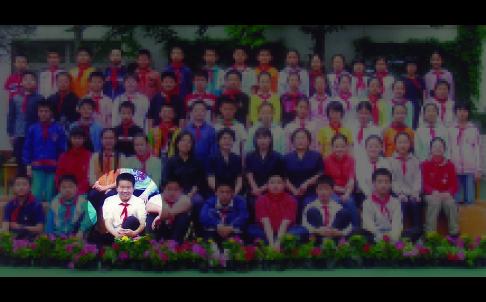 Li Tianyi, who was arrested last month for allegedly participating in a gang rape with four other people in a Beijing hotel, may have used his famous parents’ connections to falsify records to make himself seem younger than he actually is, according to a blockbuster exclusive from the South China Morning Post.

Angry netizens pointed to earlier media interviews given by his famous parents, which seemed to indicate that the son was in fact a few years older, and speculated the family might have pulled strings to falsify records, in the hope of helping their son escape the full wrath of the law.

The above photo may prove it.

A graduation photo obtained by the South China Morning Post and statements by two of Li’s schoolmates also seem to indicate that the younger Li is likely to be older than his family has recently claimed.

Those between the ages of 16 and 18 are considered minors, for whom the Chinese criminal justice system is usually more forgiving. However, SCMP’s sources say Li Tianyi may be as old as 19.

The photo shows one graduation class of Beijing’s prestigious Zhongguancun No 1 Primary School, dated 2006. An introductory text printed next to the photo identifies Li as one of the boys in the class. Most of those in this class photo are now 19 years old, Li’s classmates told the Post.

“We all know his father is Li Shuangjiang,” said one of the classmates.

“We always thought he was of the same age as the rest of us,” said another classmate.

Both classmates spent their entire six years of elementary school in the same class as Li. They spoke to the Post on the condition of anonymity as they feared reprisals.

No one in the Li family’s camp answered SCMP’s calls.

A source close to the investigation into the gang-rape case told the Post that the Beijing police had not looked into questions about Li’s age.

“Unless Li’s own family asked the police to verify his birth documents, the police usually wouldn’t act just on the public’s suspicions,” said the source.

Could that change? Presented with enough irrefutable evidence, could authorities decide to try Li Tianyi as an adult, or would existing guanxi with his famous parents take precedent? Stay tuned. This story gotten quite interesting.

PLA general’s son in rape case may have lied about his age to face lighter sentence (SCMP, H/T Alicia)

3 Responses to “SCMP: Li Tianyi, Accused Of Gang Rape, Is Actually Older Than 16 And Should Be Tried As An Adult”