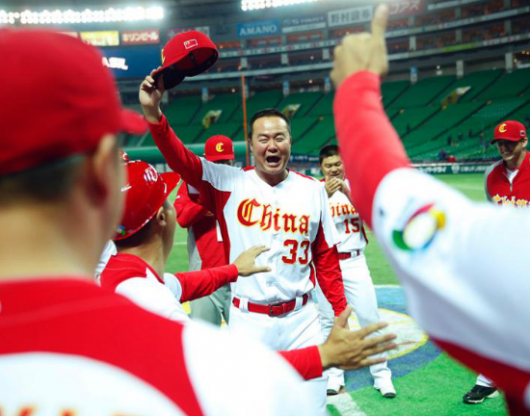 The story of China’s World Baseball Classic win against Brazil begins like any other: on a dirt field. “The field took just four months to build amid the high-rise apartment blocks on the outskirts of Changzhou,” begins Justin Bergman’s story in Time two years ago. This was Major League Baseball’s second training school, seeking to find Chinese ambassadors for a sport banned during the Cultural Revolution. How many players in uniform on March 5, playing in their third and final tournament game, down 2-0 in the bottom of the eighth, came from a field like this?

The odds were against them. They had cobbled together only four hits all game, half of them by Ray Chang, who isn’t even Chinese by nationality (he was born in Kansas City, Missouri). But you know how these things go, baseball rallies: a slow build, an accretion of hope, beginning with… an infield hit.

Meng Weiqiang reached on a grounder that didn’t leave the left side of the infield. A strikeout later, and the rally continued in the most agonizing of baseball ways: with walks. One pitch after another, each a dart carrying the possibility of fortune or failure, the ball sailed off target, and first Cui Xiao, then An Xu took his base.

With the bases loaded and one out, Ray Chang, Team China’s leader and undisputed best player, stepped into the on-deck circle.

Chang began his professional baseball career at the age of 21 in rookie ball with the San Diego Padres, and like the thousands who embark on their baseball journeys every year, perhaps he, per the norm, dreamed of making it, as they say, and stepping onto the manicured lawns of the sport’s cathedrals in The Show. Eight years later, he’s a drifter, having reached Triple A with three different organizations without ever getting that call. This is normal, too. Baseball has a euphemism for these type of players: “lifers.” One year shy of 30, Chang is becoming one, relegated to the game’s lower echelons.

But in this moment, there was a more pressing concern: Thyago Vieira, the pitcher, staring down Lu Zhenhong at the plate. A double-play would kill the rally, end the inning with China’s best hope still waiting for his chance.

Lu walked on four pitches to bring in China’s first run. Chang was in the batter’s box before Meng Weiqiang even crossed the plate.

“No doubt, that was the biggest hit of my life,” Chang would say afterwards. “I’ve played seven or eight years of professional baseball. I’ve had some clutch hits in my career, but nothing like this. This is not just for a Single-A, Double-A team. This is for an entire country.”

You already know what happened, because it’s the perfect script. Of course Chang took two pitches and found himself one strike away from sitting down. Of course he fouled off two more pitches, postponing the possibilities renewed with each wind-up. Of course, jammed on an inside fastball, he lined a single to left-center, and celebrated as the tying and go-ahead runs cross the plate. Watch him. Watch all of the players in the dugout. Watch Art Howe, another baseball lifer immortalized by Philip Seymour Hoffman’s depiction of him in the movie Moneyball. This is for an entire country:

What Chang really means is that it’s for a team: one bonded by a passion that, even in obscurity amid a country of 1.3 billion, manages to shine thanks to moments like these.

In the next half-inning, after Lu Jiangang would blow a fastball by the final batter, players and coaches celebrated like they had just won the World Series. “They’ve worked so hard, and to win this game in comeback fashion is incredible,” the announcer says. He prefaces the statement with three names: Ray Chang, John McLaren, the manager, and Bruce Hurst, the pitching coach. They might be the only three names he recognizes. It would’ve been impossible to name the entire team, of course, with players that none of us have seen, mostly toiling in a league that has quietly been allowed to exist since 2002 (that would be the China Baseball League). But what a team it was, for one night, in Fukuoka, Japan. The win guarantees China a spot in the 2017 World Baseball Classic, where we’ll be watching.