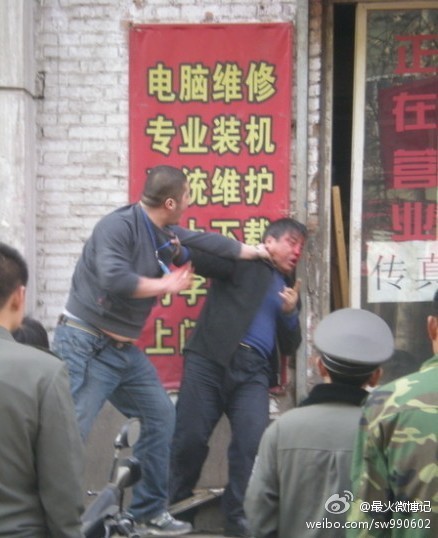 Found on Sina Weibo, the above picture supposedly depicts a thug beating a petitioner in broad daylight on the streets of Xi’an in Shaanxi province. The man on the left is a goon allegedly hired by a demolish-and-relocate (chai-qian) gang, perhaps a real estate company or a local official. (Think the government wouldn’t get involved? A group of officials was recently arrested for doing just such a thing.) The bloodied man, we’re told, was resisting chai-qian. If not an actual petitioner, he was at least enough of a pain in the rear to require a lesson in local village politics.

What we really want to turn your attention to, however, are the uniformed men standing and watching this beating. They appear to be, if anything, keeping bystanders out, so that the thug gets in as many free shots as he thinks necessary. Vile and dastardly, this. What can we say? It’s just chengguan being chengguan.