A traditional rhyme in Sichuan goes like this: “Toss medicine money, worship your godfather, throw away clothes, and pray for the whole family.”

The people of Mianyang, the second largest city in Sichuan province after Chengdu, take the rhyme very seriously, along with other traditions. On March 18, thousands flocked to Jushui Village for the Ju Water Bridge Festival (雎水踩桥会), almost all of them to do one thing: step on a bridge.

More than 300,000 people gathered on Peaceful Bridge, according to news reports. A famous Sichuanese saying goes like this: “If a husband and wife both walk on the bridge, they will live happily ever after; worshipping ancestors on the top center of the bridge, children will be immune to disease; tossing money you would use to buy herbal medicine into the river, everyone in your family will live long and prosper; tossing your clothes, there will be no flooding in the city.”

Every year, tourists walk from one end of Peaceful Bridge to the other three times to ensure peace and safety for the whole year.

“The bridge sure is strong,” netizens back home wrote. Others were in disbelief. “I did not go! Safety’s first. You can never trust Tofu-dreg projects.” “You don’t want to step on disaster instead of happiness,” another added. A few netizens denied the tradition itself: “Come on, we all know we need to work for our happiness, ‘stepping on happines’ is make-believe, a pastime or family activity, that’s all.”

But today, Ju Shui Festival is also a chance for Sichuanese from all over to get together. It’s quite special, since Sichuan has a distinct culture. For starters, Sichuan food is unique, as is Sichuan Opera, with its face-changers. And Sichuan is the most populous province in China, and among the largest. Getting together to talk and celebrate is meaningful.

Officials in Mianyang expected a large turnout and were prepared. A sizeable police force kept order, and sent visitors across the bridge in groups. As tourists tossed clothes and money into the river, fishermen underneath immediately fished out the goodies.

This year, however, was the first time that the festival exceeded 300,000 people. Was it to observe a tradition, or a yearning for an old way of life? Perhaps visitors just wanted to express their hope for peace and happiness. 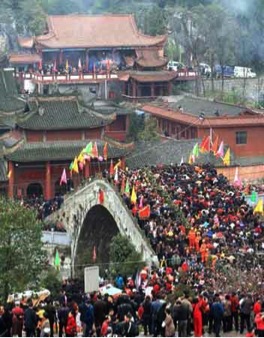 One Response to ““The Bridge Sure Is Strong”: 300,000 Gather Atop Bridge In Sichuan For Traditional Festival”