The Associated Press has just published footage of today’s 90-minute mass rally in Pyongyang, and it was very North Korean. Watch the weirdness that is thousands of troops on Kim Il Sung Square clapping while leaders on the rostrum clap back.

Soldiers and students reportedly chanted, “Death to the US imperialists” and “Sweep away the US aggressors.” As we saw earlier, North Korea would very much like its people to believe they can attack the US. They probably can’t, but as AP notes:

A full-blown North Korean attack is unlikely, though there are fears of a more localized conflict. Pyongyang has railed against the U.S. decision to send B-2 bombers for military drills with South Korea. 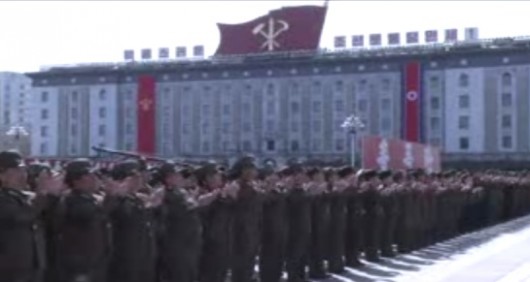 One Response to “Watch: Mass Rally In Pyongyang As Students Chant “Death To US Imperialists””