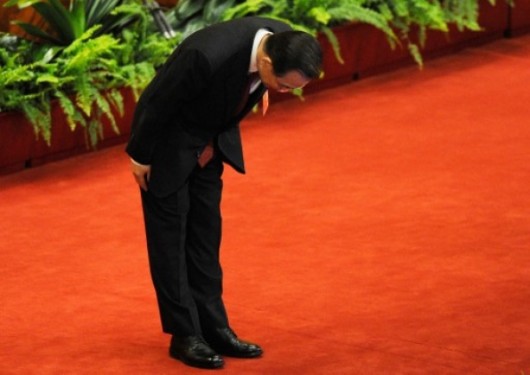 Wen Jiabao gave his final speech before the National People’s Congress on Tuesday among a crowded room of delegates, then bowed three times to the audience and took his leave. At the end of the 12-day session, he, Hu Jintao and other party leaders will step aside as new leadership takes the reins, led by Xi Jinping and Li Keqiang as the new president and premier.

Despite criticism and a dip in popularity, Wen’s speech was, as always, measured and tactful. (Or as the Los Angeles Times’s Barbara Demick put it: “He read a 100-minute statement that was dull even by the standards of the country’s soporific political theater.”) The 100-minute speech set the stage for the incoming leadership, putting forth topics the new administration hopes to tackle in the coming year, particularly social issues, though he stopped short of addressing corruption. There are those who hoped to hear more on environmental reform to curtail serious problems like smog and pollution, but these issues received a cursory and vague mention.

“We should adhere to the basic state policy of conserving resources and protecting the environment and endeavor to promote green, circular and low-carbon development,” Wen said.

On other social issues: “We must make ensuring and improving people’s well-being the starting point and goal of all the government’s work, give entire priority to it, and strive to strengthen social development.”

More than half of the speech focused on accomplishments over the last few years. This long list, which turned tedious, fell on deaf ears. At one point, Mr. Wen went so far as to mention “31 airports and 602 shipping berths for 10,000-ton ships were built.”

Premier Wen is speaking. These men (CPPCC delegates, I think) are snoring: twitter.com/markmackinnon/…