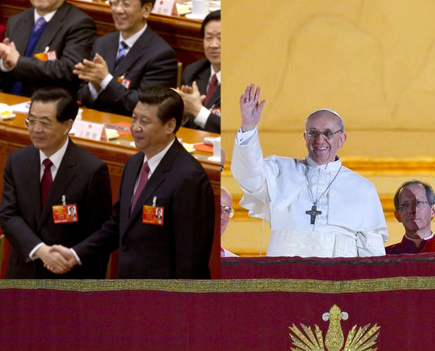 It’s been said before by many commentators — e.g., Eric Fish of Sinostand (“The Catholic church and CCP: estranged brothers?”) and Adam of Visions of Paradise (“Several times in the past I’ve read quotes stating that Communist governments learned how to manipulate their citizens by imitating the Catholic Church”) — that the Chinese Communist Party bears uncanny resemblances to the Catholic Church. So what but apt is it that, just hours after Jorge Mario Bergogli of Argentina appeared on the St. Peter’s Basilica balcony as Pope Francis, Xi Jinping would shake Hu Jintao’s hand in Beijing’s Great Hall of the People and officially take the title of president.

Anyway, our headline is wrong. Xi was the one elected — the delegates voted 2,952-to-1 for him, with three abstaining — while Bergoglio was anointed.

We’ll point out that Xi was the only one on the ballot. At the risk of offending my Catholic friends, I’ll abstain from talking about Bergoglio on this day.

Meanwhile, China also has a new vice president. Via AP:

Named vice president in a vote of 2,839-80 was Li Yuanchao, a liberal-minded reformer and a close ally of Hu for decades. The move breaks with the practice of recent years, because Li is not in the party’s seven-member ruling inner sanctum. It is seen as a concession to Hu’s lingering influence and as a reward to a capable if not wholly popular official.