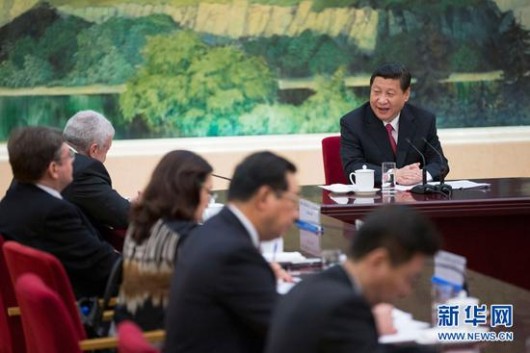 Xi Jinping sat down with foreign media yesterday for the first time since becoming CPC chairman, speaking with reporters from BRICS countries — Brazil, Russia, India and South Africa — ahead of the BRICS summit later this month. This historic occassion drew almost no English-language media coverage, leading Foreign Policy’s Isaac Stone Fish to ask, “What if Xi Jinping gave an interview and no one cared?”

The closest anyone came to asking a tough/interesting question was when the Brazilian journalist asked for personal information about Xi’s experiences governing China: “How many time can you spend with your family? Can you introduce to us your personal experience and hobbies” the reporter asked.

Via the official transcript provided by the Ministry of Foreign Affairs (the emphasis is mine):

I have many hobbies. I love reading most. Reading has become a way of life for me. I am also a sports fan. I like swimming and mountain climbing. I liked football and volleyball when I was young. I wish to congratulate Brazil on hosting the World Cup again. Unpredictability is what makes a sport match, especially a football match exciting. During the last World Cup, we had Paul the Octopus. I wonder if next year, there will be another octopus who can predict match results. The Brazilian team has the home-court advantage and I wish them good luck.

Maybe the New York Times, et al. aren’t too sad to have lost their invitation to this presser.

One Response to “In First Interview With Foreign Media, Xi Jinping Reveals Fondness For Paul The Octopus”