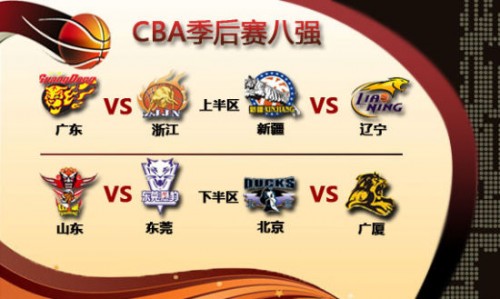 The Chinese Basketball Association playoffs got underway Wednesday, and to discuss the teams and break down the matchups, we’ve invited the foremost English-speaking CBA expert, Jon Pastuszek, who runs the excellent NiuBBall. Our questions to him are in bold.

Are the Guangdong Southern Tigers the Miami Heat of the CBA this year, and is it really healthy for the league that they’re going to win it all again?

In Beijing, absolutely. Elsewhere, I think the whole “sweep the leg” episode from last year caused a lot of people to turn on them. I don’t know if they’re the Miami Heat, but they’re certainly a team that is not liked.

Is it a bad thing if they win again? I’m not so sure. I’m of the opinion that the Tigers’ window is closing. Their longtime core of Wang Shipeng and Zhu Fangyu are advancing in age and they currently lack the young players who could step into their shoes. That next generation of players, Zhou Peng, Su Wei and Li Xiaoyu, crapped the bed last year against Beijing and don’t look like a group who can carry the torch with confidence.

What happens if they don’t win? Yi probably won’t be back next season. Their mid-season coaching hire, Jonas Kazlauskas, also probably won’t be back next season. Their vets will be a year older. They’ll still be towards the top of the league, but they’re no longer the juggernaut they once were. A lot of that has to do with the overall quality of the league improving every year, but the roster isn’t what it used to be. We’ll see if they have anything up their sleeves this off-season, but Guangdong’s dynasty, like they all eventually do at some point, might be coming to a close.

Assess Yi Jianlian. How is this dude not in the NBA?

For Team China and in the CBA, dude is a beast because in both of those settings it’s rare for a seven-footer to be as skilled and as athletic as Yi. But in the NBA, what exactly is he? It’s a question that no team has been able to answer yet. He doesn’t really have an NBA skill. He doesn’t rebound. He’s a non-passer, although he’s improved a bit in that respect with all of the double teams he’s seen while playing for China the last two summers. Defensively, he’s a wreck. He has never shown the desire to want to play inside, which means he’s floating around free-throw line and out. But he’s not a good enough shooter from the three-point line to be an effective stretch big man.

He gets a lot of criticism for not being tough enough, and that’s something I believed as well for a few years. But after seeing him up close with the national team these past three summers, I’m not buying that at all anymore. And if you talk to coaches who have coached him with the national team setup, they’ll tell you the same thing. Not only has he stepped up and taken the challenge of being The Guy for the post-Yao Chinese, he’s excelled in that role. Some of his best games have come against top competition (Spain in the Olympics, Jordan in the Asia Championship finals), and he has been among the top big men both at the 2010 World Championship and last summer at the Olympics before he got hurt. So I just think people need to think a little bit more on Yi instead of just throwing out the “soft” label and painting the whole thing over.

All that being said though, he’s just not good enough for the NBA. if he decides to play in Europe next season for a Real Madrid or Barcelona, or any other top club team, he’d be fantastic. But it just goes to show you how good the players are in the NBA.

How does a team with Quincy Douby, he of the 75-point performance, not be better than 8th place?

A team who hired a head coach who wants to play up-and-down for some reason signed Eddy Curry. Your guess is as good as mine as to why.

This figures to be the most — only? — competitive series of the first round. Break it down for us.

They’re two similarly constructed teams. Both have very good Chinese players (Liaoning’s are second only to Guangdong), both team’s foreigners don’t totally dominate the ball and they’re both based in cold-as-hell cities with bad air (Urumqi and Benxi). The fact that Xinjiang was able to grab a 4th seed is noteworthy because they went through a prolonged stretch early in the season where both of their foreigners were on the shelf with injuries. They’ve been killing teams recently, with former NBA’er Von Wafer playing especially well. James Singleton, who missed a big chunk of the season with a knee injury, is finally back and looked like somewhat like his old self in their last regular season game.

But whereas Xinjiang is just finally getting healthy, Liaoning is limping into the postseason with two key injuries to Chinese players. But they’re still capable of giving us a good series: Guo Ailun, who was on the National Team last summer, has been very effective at the point guard, while Josh Akognon can get blazing hot very quickly. Solomon Jones isn’t much of an offensive threat, but his length and athleticism makes him one of the few rim protectors in the league and gives them a very versatile defensive option inside.

Liaoning has to win one of the next two games at Xinjiang… otherwise, it potentially sets up a do-or-die Game 5 in Urumqi. And with no foreign referees until the semifinals, let’s put it this way: Liaoning is guaranteed to lose that one.

I think it’s a team that’s been pacing itself. After all, their best player is a 36-year-old point guard, Stephon Marbury, who coincidentally happens to be the best and most unstoppable player in the league. Ensuring health and fresh legs are more important than anything else. They know that when it counts in the playoffs, they’re capable of turning it on. And in big regular season games (Guangdong, Xinjiang, Shandong) they’ve come away with results. So it’s nothing to be overly concerned with in my opinion.

Odds that the Ducks repeat as champ?

I think they’re pretty good. It’s going to be a slugfest when they play against Shandong and their three imports in the semifinals. But up until this point (save for Tianjin, unbelievably), nobody has figured out how to to keep Marbury out of the paint. It’s not like you can really gameplan for Beijing — they run very simple sets and their go-to play is Marbury spread pick-and-roll. So until somebody proves to me that they can stop that, I have to stick with the Ducks. Plus, they’re playing the entirety of the playoffs at the 18,000 seat NBA-quality Wukesong Arena. Last season during the Finals against Guangdong, every game was sold out and electric. It’s an advantage no other team will even come close to enjoying and I think it’s something that will prove to be a difference-maker as they advance into later rounds.

I have absolutely nothing to say about this series. Perhaps you do?

All the pieces have come together in Shandong this season. Of course, it’s easier for that to happen when you’re playing with three imports as opposed to just two, like most other teams. But this is a heck of a team; their foreigners (Pooh Jeter, Zaid Abbas and Jackson Vroman) don’t dominate the ball and are all extremely unselfish, they have multiple Chinese players capable of making meaningful contributions and they consistently defend.

DongGuan meanwhile, has been picking up the pieces all season long. Lester Hudson, who was second in the league in scoring last year, went down mid-season with a broken hand. They’ve dealt with other injuries to their Chinese. And they’ve been dealing with the reality of having to balance the playing time of a very promising yet very raw potential NBA player, Li Muhao, while still winning games. Hudson is back with the team for the playoffs now, but in yet another stroke of horrible luck, their other American, CBA All-Star Marcus Haislip, sprained his ankle last weekend and is playing with a limp. These guys are impeccably coached by Brian Goorjian, and it’s a tribute to him and his staff that they even made it here, but it’s going to be a short series.

Finally — your first round, semifinals, and finals predictions. Go!

Jon Pastuszek writes about all things Chinese hoops at NiuBBall.com. His work includes a New York Times piece about Quincy Douby and the Xinjiang Flying Tigers’ 2011 playoff run, and he’s previously written about Stephen Marbury for this site.