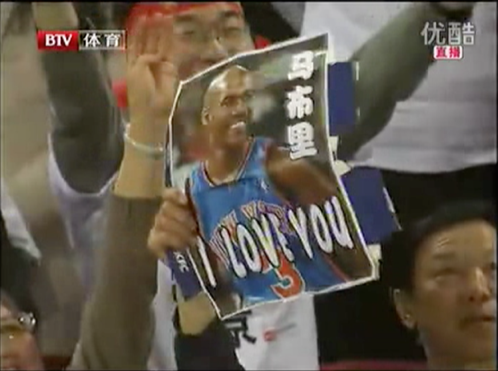 It’s November 2010, and Stephon Marbury has locked himself inside a hotel room in Taiyuan, Shanxi province, sad, hurt and uncertain over his future in China.

Eight months earlier, after basically being told he wasn’t welcome anymore in the NBA, he had come to play for the Shanxi Brave Dragons of the Chinese Basketball Association. American media cackled at this desperate move from a desperate man, and eagerly awaited what they felt sure would be a quick return Stateside.

In China, fans saved their laughter for the team Marbury was joining. Known equally for their dirty coal-crusted home city, an obsessive-compulsive owner, Wang Xingjiang, known as Boss Wang, and a huge pile of losses over the years, the Brave Dragons were their own punch line.

But it became clear from the beginning that Marbury didn’t consider any of this a joke. Arriving in January with a one-year contract and an ambitious business plan to sell his line of Starbury sneakers, Marbury quickly ingratiated himself to fans both on and off the court. He willingly engaged the media. He patiently signed autographs. He took pictures with locals. He learned a few basic Mandarin words. He tried Chinese food. He was, genuinely, it seemed, happy.

This was in stark contrast to Shanxi’s previous expensive import, Bonzi Wells, who hated it so much in China – the food, the long travel, the cold gyms, the endless practices, the crowds, everything – that he went back to the US during the CBA’s annual Spring Festival break and never came back. He lasted 14 games. After 15 games, Marbury’s CBA career seemed to be just taking off, culminating with the MVP award in the CBA All-Star Game. Shanxi was ready to sign Marbury to a multiyear extension. In a little under half a season, he had turned the Brave Dragons into the CBA’s hottest ticket while transforming himself into the foreign darling of China.

But maybe most important of all, he’d found peace. With the Chinese either not knowing or not caring about his past, here was a rare opportunity to reinvent himself, a clean slate. He used that opportunity to show love – “love is love,” as he was fond of tweeting.

Which is why, back in the hotel just two weeks before the start of the new season, it hurts so much to realize that Shanxi no longer has love for him: Boss Wang has just informed him he isn’t wanted.

It’s December 2011, and Stephon Marbury and the Beijing Ducks have just won their 13th straight game to open the season, the best start in team history.

“Our goal is to win a championship,” he says.

Over a year earlier, after his separation with Shanxi, he had come to Beijing to offer his services. Boss Wang and his newly appointed general manager, Zhang Aijun, became the latest to laugh at him, adding to his desire to prove his doubters wrong.

The reasons for Marbury’s separation from Shanxi are unclear. Shanxi claimed he showed up to camp out of shape and with too many demands; Marbury says he merely wanted health insurance for his family and that he was committed to leading the team toward the playoffs. Whatever the case, Wang and Zhang proposed that Marbury stay on as an assistant, with the possibility that he would play if the team made the playoffs. Though they never said it publicly, they likely felt that he wasn’t good enough to lead their team.

Feeling cheated, Marbury declined, and after holing himself up in his room to recover and plan his next move, he boarded a plane to China’s capital. For Marbury, the timing of Shanxi’s decision could not have been worse — with the season starting soon, most teams had signed their allotment of foreign players, making his options severely limited.

One team that still had a spot was the Beijing Ducks. Marbury literally showed up at their front door. If they wanted him, he was theirs.

It turned out, though, they already had a guy lined up, another former NBA All-Star, Steve Francis. And though the deal hadn’t been finalized and Francis wasn’t in China, they said they were going through with it.

Known as Fu Lao Da (roughly translated as Don Francis, in reference to the mafia) by every Chinese who watched the Houston Rockets during Yao Ming’s first two years there, Francis was at the time one of China’s favorite NBA players. Idolized for his high-flying dunks just as much for his generosity toward Yao during his rookie season, the announcement of Francis’ contract with the Ducks was met with pinch-me-is-this-really-happening frenzy.

But the truth was, as informed fans and journalists knew, Francis was coming off major knee surgery and hadn’t played professional basketball in almost two years. And while television reports were announcing his lucrative two-year deal with clips of the old Stevie Franchise throwing down sick dunks, an old, skinny and out-of-shape retired basketball player got on a flight from the States bound for Beijing.

What followed was the most disastrous stint for a foreigner in Chinese basketball history. His 13-day, four-game stay included a 17-second debut with an ice pack around his ankle, a middle-finger, an outright refusal to practice and a grand total of 14 minutes played.

Francis would serve as the most extreme case in a season that was dominated by similarly failed jumps to China by former NBA players. Undoubtedly influenced by Marbury’s success in Shanxi, Javaris Crittenton, Ricky Davis, Mike James and Rafer Alston all at one time or another came to China with a goal to cash in on China’s big basketball market, and all left within a month.

Marbury ended up on a newly established team in Foshan, Guangdong province. His team, the Dralions – a cross between a Dragon and a Lion – had just moved from Shaanxi (not to be confused with Shanxi), where the owner had essentially gone bankrupt. As is the case with most bankrupt teams forced to relocate, Foshan stunk. At the core of the problem, their Chinese players were all very young, and they weren’t very good.

Meanwhile, not an hour away from Foshan were the Guangdong Southern Tigers, winners of seven CBA championships, and the DongGuan Leopards, an up-and-coming team with several young players who will one day play for the Chinese national team. Once the most popular player in all of China, Marbury was now barely the most popular player in his province. No matter how charming and nice he remained, people were unable to get excited about watching a losing basketball team. No longer the newest sensation in China, some in the media wondered if Marbury Mania had run its course.

He paid no mind to it, though. While players were running to US-bound planes at full sprint, Marbury remained happy with his life in China and maintained that his future rested here. As the losses mounted, he tried to stay positive by saying his goal was to develop the team’s young players.

Foshan ended the season by winning four of its last five. Still, the Dralions were 11-21, the fourth-worst team in the league. And the critics were clapping: two years in China, no playoff appearances. Some things never change, they thought.

Which is why, back in the Beijing locker room as he changes to leave the arena after starting the year 13-0, Stephon Marbury is feeling so good.

It’s August 2011 and Marbury has just signed a contract with the Beijing Ducks, the same team that rejected him for Steve Francis a year ago.

Reports of a decrease in Starbury’s popularity were premature, at least from a front-office standpoint. Once it became obvious that Marbury wasn’t headed back to Foshan, several teams expressed interest, including the Guangdong Southern Tigers, fresh off yet another CBA title.

In the end, he chose Beijing. As one of China’s biggest markets, it meant it would be good for his shoes. It was also, as he finds out after attending a Beijing Guo’an soccer match at Workers Stadium in the summer, a city passionate about sports. The fact that it’s a bustling metropolis rife with foreign restaurants and supermarkets doesn’t hurt, either.

It’s March 18, 2012, and Stephon Marbury is shredding the Shanxi Brave Dragons for 30 points and eight assists as the Beijing Ducks punch their first-ever ticket to the CBA Finals.

A week earlier, after torching his old squad for 53 points in Game 2 and 52 points in Game 3 to lead Beijing to a 2-1 series lead in the best-of-five series, Marbury was accused of striking a fan after a tense Game 4 in Taiyuan that Beijing lost. (In all likelihood, the fan made it up, as no witnesses corroborated the story and no video evidence was produced. Marbury received no punishment from the league.) Once again, American media laughed: it took more than two years, but the real Steph has come out for everyone to see. They laughed at Marbury, they laughed at his shoes, they laughed at his goal of winning a CBA championship.

But all they really did was give him more motivation.

Game 5 was delayed four days because CBA officials wanted tempers to simmer, but the game itself, in front of a packed Shougang Gymnasium on national TV, produced little by way of drama. The Ducks cruised to a 110-98 victory. Afterwards, Marbury ducked into a bathroom and sobbed with joy.

This moment, by all accounts, was portrayed as the denouement of the 2012 Stephon Marbury saga. Because the team that waited in the finals was the four-time defending champs, the Guangdong Southern Tigers, with their NBA-level imports in Aaron Brooks and James Singleton and a roster of full of National Team players. Surely the Ducks wouldn’t be able to write a happier ending than the one they just got. 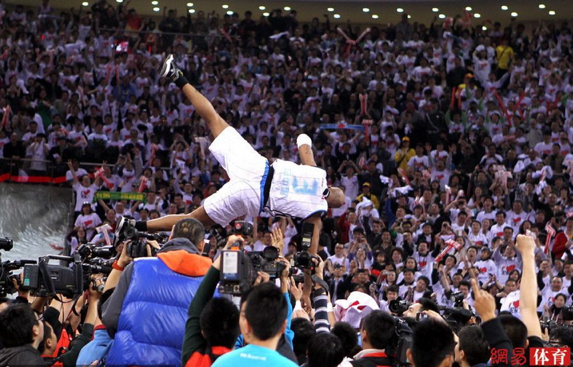 It’s March 30, 2012, and Stephon Marbury is a champion. Nobody is laughing anymore.

In five games, Beijing upends Guangdong in the biggest upset in CBA history. And then, with his teammates and the coaching staff still in the locker room, Marbury emerges by himself and stands at midcourt while 18,000 – the largest crowd to ever attend a CBA game – chant his name.

Over the last season, Year Three, Marbury found his home as a Beijing ye menr – a true Beijinger, in the eyes of the people who live here. He’s not just a basketball player, he’s a fixture of the city, a daily participant in its day-to-day. He continues to go to Guo’an soccer games, he chats with fans on Sina Weibo (Chinese Twitter), he writes a weekly China Daily column and occasionally rides the subway to practice. People feel that it’s genuine.

In his own locker room, he’s Ma Dao, the undisputed leader of the team. He is lauded as an on-court coach by head coach Min Lulei. His Chinese teammates point to his positive attitude and work ethic as major reasons this year’s team came together so quickly, going from an eighth seed in last year’s playoffs to champions. Two rookies, Zhu Yanxi and Zhai Xiaochuan, both of whom played critical roles in Beijing’s success this year, were selected to the National Team training camp roster this summer; they credit Marbury with helping them achieve that.

That will come later, maybe. The only thing that matters now, though, are the fans showering him with love. He thumbs the front of his “Champions” t-shirt while fans chant, Zongguanjun – “We are champions!”

Shortly after lifting the trophy, he tweets, “I wanna thank all of the reporters who said I couldn’t play basketball anymore. I took your negative energy and turned it in positive energy.”

Love is Love. So is proving everybody wrong.

9 Responses to “Stephon Marbury Has Silenced His Critics This Year, Maybe For Good”