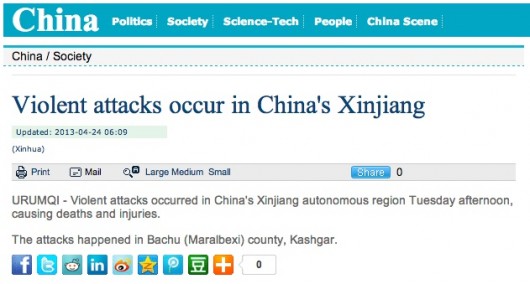 According to Chinese media, violence that broke out in Bachu county, Kashgar yesterday, leaving 15 dead; among those, 10 are Uighurs, 3 Han and 2 Mongols. Two other Uighurs were reportedly injured. Eight people have been arrested.

The incident reportedly began when three community workers stumbled upon a shack of knives, and were subsequently held hostage by the residents. These three hostages were killed once police tried to intervene, and fighting erupted.

Sina English, which has just published a Shanghai Daily article, calls these people “mobsters,” who then set the house on fire.

“Twenty-one persons were killed in all… including social workers and policemen,” an official surnamed Cao from the provincial government’s news office said of the incident, which, he added, occurred on Tuesday.

A confrontation involving axes, knives, at least one gun and ending with the burning down of a house left 21 people dead in China’s troubled far-west region of Xinjiang, a government spokeswoman said on Wednesday, calling it a “terrorist attack”.

It was not immediately clear how many burnt to death.