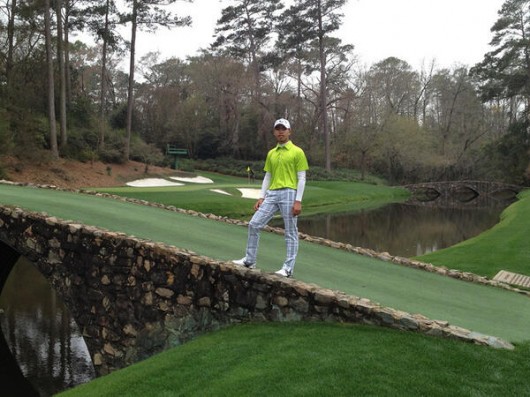 Guan Tianlang was born to play golf. He has already been in the sporting spotlight for at least eight years, but the factor that has been consistent is his ice cool temperament. Those around him talk glowingly of his level-headed manner, and ESPN’s Gene Wojciechowski described Guan’s expression as he qualified for the Masters by winning last year’s Asia-Pacific Amateur Championship as “somewhere between comatose and a guy reading federal tax code.”

If that all sounds a little, well, dull, remember that in golf, boring wins tournaments. That could all change, of course, once the millions start pouring in, and Guan discovers things like girls and nightclubs (see: Woods, Tiger), but for now, golf is his life and he seems to be enjoying it. He’s had practice rounds at Augusta with many of the game’s top players, posting pictures of his playing partners both on Twitter and Weibo, and happily engaging online with his growing army of followers.

Guan won’t win the Masters anytime soon. For one thing, he hits the ball far, far shorter than most of the pros, and at a course like Augusta, that’s not going to cut it. But he’s left no stone unturned in his preparation, and has a decent chance of finishing as the top amateur, if only an outside chance of making the cut.

A lot of people have noted that Guan uses a controversial belly putter – a snide way of explaining away his talent. But aside from the fact that recent major champions Ernie Els, Keegan Bradley and Webb Simpson have all used them, it’s worth pointing out that Guan only converted to the belly putter after relocating to the US and picking up the habit there. Blame the rulebook if you like, but don’t belittle a 14-year-old Chinese kid for adopting an American trend.

Future success, of course, is not guaranteed: for every Tiger Woods and Phil Mickleson, who have converted strong amateur careers into even better professional ones, there’s a Mitch Voges or an Eric Meeks who have remained in obscurity in the amateur ranks.

But Guan Tianlang isn’t alone. Along with fellow Chinese youngsters Andy Zhang and Ye Wocheng, aged 15 and 12 and also playing in top-level pro tournaments, Guan is leading golf’s next power shift. They, and others, are almost exclusively relocating to the US to hone their skills, and are lucky enough to come from families who can support them until the sponsors take notice. But, one way or another, Chinese golf is on the rise.

Greg Norman said in 2010 that within 20 years, East will be beating West in golf. At the time, that seemed wildly optimistic. Right now, though, it’s looking pretty conservative.