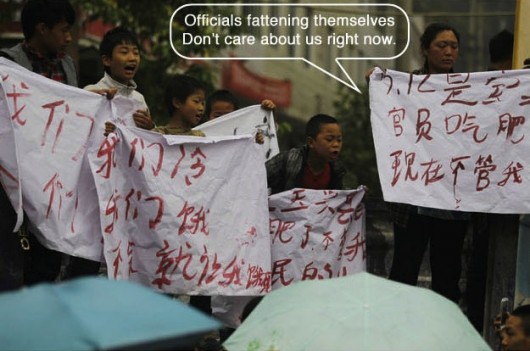 On April 20, a 6.6-magnitude earthquake struck Lushan in Sichuan, 160 km southwest of the provincial capital of Chengdu. While much smaller than the 8.0-magnitude (125 times more severe) quake that hit the region in 2008, Xinhua reports that there are 192 dead and more than 11,000 injured.

Sichuan is no stranger to earthquakes. Since records began there have been 28 measuring at least 6.0 in magnitude in the province. The fault line lies between the Longman Mountains and Sichuan basin, and is caused by India’s drift northwards, forcing Tibet eastward. This combination applies pressure on Sichuan, which is being squeezed on both sides.

The natural problems caused by continental drift are compounded by the construction of many dams along the fault lines.

Shemin Ge of the University of Colorado told New Scientist that the 2008 earthquake might have been, at least, partially triggered by the giant Zipingpu Reservoir, located 20 km from the epicenter. The reservoir would have increased the pressure in the rocks.

It’s too early to know whether reservoir-building contributed to last week’s quake. Of more immediate concern is the damage to dams and reservoirs, says Mian Liu of the University of Missouri in Columbia. According to the Ministry of Water Resources, two medium-sized and 52 small dams were damaged, with residents evacuated downstream of five of them.

It would be wise to earthquake-proof all the dams to ensure a bad situation doesn’t become infinitely worse with the addition of gushing water. (In 2011, Adam Minter wrote about the effect of the Three Gorges Project on natural disasters, namely earthquakes and droughts.)

Of course, all stories about that possibility are quickly being censored, as you can see on Buzzfeed via @CensoredWeibo:

Also, according to New Scientist:

The 2008 quake, whose epicentre was 85 kilometres away, may also have contributed to the latest event, by redistributing pressure along the Longmen Shan fault line, says Liu. In the aftermath, he calculated that it had increased the risk of another magnitude-7 quake within the next 50 years by a few per cent. “Seems nature was in a hurry,” he says of last week’s quake.

Earthquake prediction is still more of an art than a science, but Ge predicts that because of the pressure built up due to the last two quakes, the area most at risk is the Aninghe fault line farther south. When it will hit, no one knows.

2 Responses to “Are Dams Exacerbating Earthquakes In Sichuan? Authorities Aren’t Considering The Possibility”