Like the most quintessential of Americana, chili is not complex — a stew of beans and tomatos, ingredients that fill the stomach, kick the tongue — yet it’s only with such a square, hearty base that we can sign our culinary art into the slight variances that elevate mere provision into the estimable domain of gastronomy. It is possible for chili to achieve morphology, where degrees of difference are plainly, even painfully apparent, so that serrano spondees affect the equilibrium of one’s inner ear in ways the pyrrhic pimiento might not, and cumin may be the split-finger dive of flavor toward the back of the throat while paprika is the wily circle change, its bottom falling out. At the Back Alley Chili Cook-Off on Saturday at Great Leap Brewing, we experienced, if not quite a chili-fueled nirvana through the collective pursuit of perfection, at least the next best thing, which even halfway decent orchestras achieve, what we can call a great melding, an understanding of how we are similar because of differences, those — forgive the cliche – spices of life. And in this concert of expattery, under slender blue skies and brazenly good weather, some of us came away — we are able to report — merry, satisfied, and full.

Who were these some of us? A dozen or so shades of hipster, from skinny pants to fixie, Neutral Milk Hotel to the full-on Jane-Goddall-coffee-sipping bearded urban woodsman, joined by those bolder colors of non-hipsters, the oranges and golds, whose business acumen and love for American football leaked through their strut or lazy confidence, and the pseudo-hipsters and hipster wannabes whom we might label mauve, lavender, or royal blue, and others resisting codification while donning tailored shirts, beanies, or African-colored windbreakers. All these people served one purpose, best that I can tell, which was to baffle, buffalo, and generally flummox bar owner Carl Setzer, who almost killed his dog, Rocky, by repeately stepping on him. (“That’s Kin and Candice’s dog,” he informed us, indignant. “And I stepped on him twice. Tim Quijano stepped on him like eight times.”)

Meanwhile, chilis walked the narrow plank of red, from apple cherry or sparkling rose to burgundy or burnt umber: there were vegetarian (five beans) and meaty chilis (three meats!), plain and exotic (scorpion!), Texan (chili con carne) and local (duck!), sweet (chocolate avocado!) and spicy. Spicy. And then there was Jun’s, which arrived late, No. 15 out of 15 contestants, featuring five spices that ranged from, a cruder mind would be excused for thinking, fuck-, fucking-, motherfucking-, baneling-blood-, and mildly-spicy. (We’re fairly sure the mildly-spicy carried the Scoville rating of a Bhut Jolokia.) “That was too spicy,” said Alicia, who might have enjoyed it less than the chili she described as tasting “like peeeeee.” Under the cool sun of a perfect midspring afternoon, our faces burnt, a freckled boy’s in the heat of puberty, while Jun chuckled behind his bubbly cauldron marked with the devil’s tint.

“I totally think we should have won,” said Helen Lu, competing alongside Phil Dunne. “Don’t you think so? Be honest.” Theirs was a mala donkey with saffron. Why be honest when you can lie, dear Helen? It totally should have won, though a case can also be made for the Cinderella pumpkin concoction, and one with bacon in it. Then there was the scorpion chitin chili of Nestor Santana and Justin Lieberthal, made with only local ingredients (no paprika, cayenne peppers, cheeses, etc.), though that wasn’t the principal gimmick. More than a few fair-weather tasters kept a safe distance. “Several times one of our competing neighbors was grabbing the attention of tasters and telling them to stay away from our food because there were insects in it,” said Santana, he of the silver curls and impish grin. “I simply smiled at that and kept ladling out the goods, taking pity on the ignorant lass who clearly didn’t understand her folly: scorpions are arachnids, not insects.”

(Personally — if I may be allowed this indulgence — I consider cheese, sour cream, and corianer the unholy trinity of the palette, so chilis containing any of these three were bound to disappoint.)

Eventually, as the attention turned inside, where Carl, growing more cross by the minute (one easily imagines the line, “Motherfucker I watch wrestling and wear Cleveland sportswear” – which he would utter a few days later, in reminiscence – running through his head over and over like a broken record), poured beers from frothing taps, the competition wound down, and organizer Candice Lee stood on a chair to announce that voting would conclude at 4:30. Thus our day crescendoed, an actual crescendo, as bodies filled the bar, spilled out into the courtyard, then farther still through the brass door and into the hutong where scooters and bicycles were parked, and people smoked, and talked, forming concentric circles of privilege that local passersby bisected without occupying, their eyes darting, scrutinizing, mute with envy.

The winners were La Fiesta and Uncle Jimbo’s Mitey Belly Roaster, with the former sufficiently impressing the handpicked judges to take home the 888-yuan prize, and the latter earning 388 yuan for capturing the “People’s Choice” award. La Fiesta was a sweet chili, delicious, while Uncle Jimbo’s Mitey Belly Roaster featured jianbing crisps, inscrutably popular. The team of Helen and Phil was recognized as a People’s Choice runner-up. Wandering out, I had no complaints, knowing not how the viands were, that very moment, sapping my energy like an industrial space heater, demanding nothing except that I embrace that quintessential of American foods, a stew of beans and tomatos.

It was only later, in the anteroom between a lucid dream where I didn’t belong and a fitful, dreary awakeness, that realization set in: man cannot subsist on chili alone. He needs that of the soil, our wellspring. Knocked out by chili and beer, tummy rumbling, there came a vision of a golden field that quickly shriveled into the horizon, the bean of a mirage eventually revealing itself as a suburban garden in a fenced backyard. Reaching down, the wide and infinte plains of Kansas unraveling, I felt the encroachment of an intersellar coldness and sense of abandonment, and suddenly there, in my palm, rested an uprooted radish.

“I thought the event was a success,” organizer Candice Lee would say, days later. “Everyone had plenty of chili and plenty of beer. The crowd and the contestants were really enthusiastic about the chili. It was nice to see how creative people got with their chili. All in all a really great day.”

“It was awesome – it went pretty smoothly, considering it was ridiculously crowded, full of people who’d been drinking all day,” said Kelly Mason.

“The most fun I’ve had since April Fool’s, and a welcome sign that Beijing is finally heating up,” said Alec Ash.

“I got chili all over my shirt,” said Gabe Clermont. “So, that sucked.” 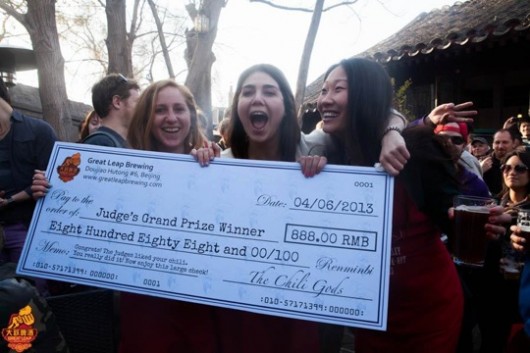 The team of La Fiesta wins 888 yuan for capturing the Judge’s Grand Prize. 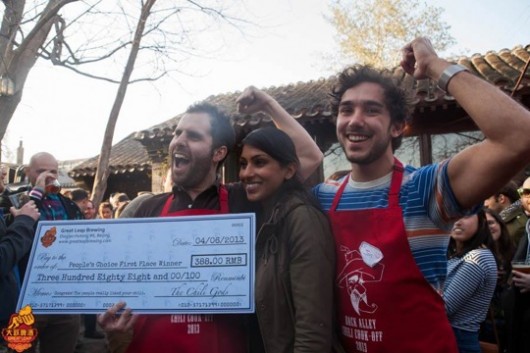 The people have spoken, and awarded 388 yuan to Uncle Jimbo’s Mitey Belly Roaster.