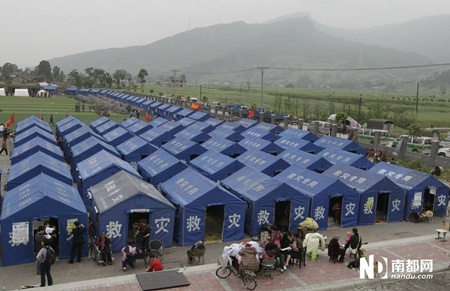 A 6.6/7.0-magnitude earthquake (according to the US Geological Survey/China Earthquake Networks Center) affecting 69 counties and 1.5 million people struck Sichuan province at 8:02 am on Saturday. People are calling it the Ya’an Earthquake, after the city where the the epicenter is located, 140 kilometers from the capital Chengdu. The current death toll is 203, with more than 11,000 injured. (Ed’s note, 1:47 pm: more recent and reliable sources have the figure at “at least 186.”)

The quake is along the Longmenshan fault, the same one in which an earthquake on May 12, 2008 killed nearly 70,000 people. More information follows.

“The epicenter, with a depth of 13 km, was monitored at 30.3 degrees north latitude and 103.0 degrees east longitude.” (Xinhua)

“On a continental scale, the seismicity of central and eastern Asia is a result of northward convergence of the India plate against the Eurasia plate with a velocity of about 50 mm/y. The convergence of the two plates is broadly accommodated by the uplift of the Asian highlands and by the motion of crustal material to the east away from the uplifted Tibetan Plateau.” (USGS)

And here. “In the fog-covered town of Shuangli, corn farmer Zheng Xianlan said Sunday that she had rushed from the fields back to her home when the quake struck, and cried when she saw that the roof collapsed. She then spent the night outdoors on a worn sofa using a plastic raincoat for cover. // ‘We don’t earn much money. We don’t know what we will do now,’ said 58-year-old Zheng, her eyes welling with tears. ‘The government only brought one tent for the whole village so far, but that’s not enough for us.’” (Gillian Wong, AP)

Politicians learn. “For all of the similarities, there were some encouraging contrasts that remind us of things that have changed in China in the past five years. In the 2008 quake, papers across the country proclaimed, in almost perfect unison, that the earthquake had ‘tugged at the heartstrings of the Chinese Communist Party.’ At the time, I was in Beijing, and I rounded up the local papers and marvelled at their consistency… // But this time, there was instant discussion on Chinese social media: photos from deep inside the disaster zone; independent calls for donations—in yuan and in bitcoin. Before the day was out, the newly installed Premier, Li Keqiang, was flying to the disaster zone, and state media was quoting him saying, ‘The current most urgent issue is grasping the first twenty-four hours after the quake’s occurrence, the golden time for saving lives.’” (Evan Osnos, New Yorker)

Chinese Red Cross told to GTFO. “The charitable organization was among the first to respond to the disaster Saturday morning, announcing on the Twitter-like Sina Weibo microblogging service that it had dispatched a team to investigate the situation on the ground. The response was almost instantaneous as thousands of microbloggers took to the comment section to post animated thumbs-down emoticons and profane suggestions that the organization take a hike.” (WSJ)

Baby born in diaster area. “Ms. Cao had been in the hospital since April 10 and was long overdue, according to CNS. She is reportedly considering naming her new daughter Zhensheng, or Quake-Born.” (WSJ)

In a wedding dress. “Ya’an TV news reporter Chen Ying conducted street interviews immediately after the 7.0-magnitude earthquake hits Ya’an, Southwest China’s Sichuan Province at around 8 am on April 20, when she was putting on the make-up for her wedding ceremony and was already wearing the wedding dress.” (Global Times)

That wedding reporter interlude, via Shanghaiist: 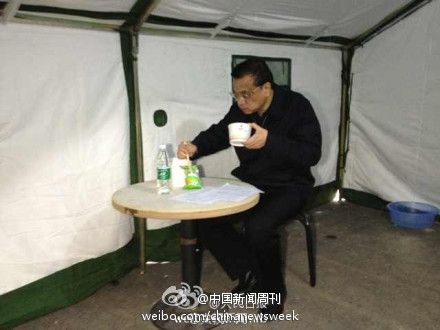