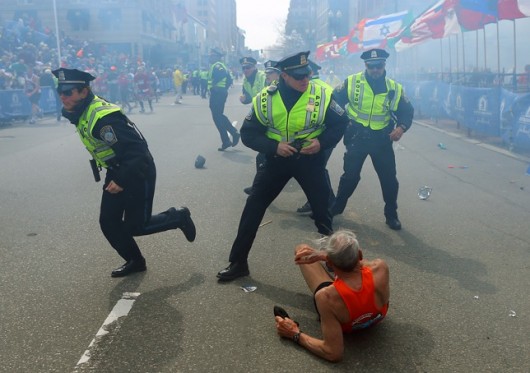 In the worst bombing on US soil since 9/11, three are dead and more than 100 are injured after two blasts ripped through a crowd at the finish line of the Boston Marathon on an otherwise perfect day.

You’ll find updating coverage everywhere at this moment, led by the Boston Globe and Gawker, so we’ll spare the words here. Just a little China angle though, via Reuters:

Of the 23,326 runners who started the race on Monday, 17,584 finished before the blast, marathon officials said. Runners were diverted before officials brought the marathon to a halt.

The official Boston Marathon website listed 47 individual runners with Chinese citizenship, which may include Hong Kong and Taiwan; 32 runners were listed as from Hong Kong.

A slight discrepancy in numbers here, but Shanghaiist notes, “85 runners from China, Hong Kong, and Taiwan were taking part in the race, none are believed to be among the injured, but two Taiwanese participants are currently missing.”

The above image, which you’re likely to see everywhere, if you haven’t already, is by John Tlumacki of the Boston Globe. More images here.

Also, someone uploaded the following video via Boston Globe onto Youku, where it’s drawn 540,000 views in six hours.