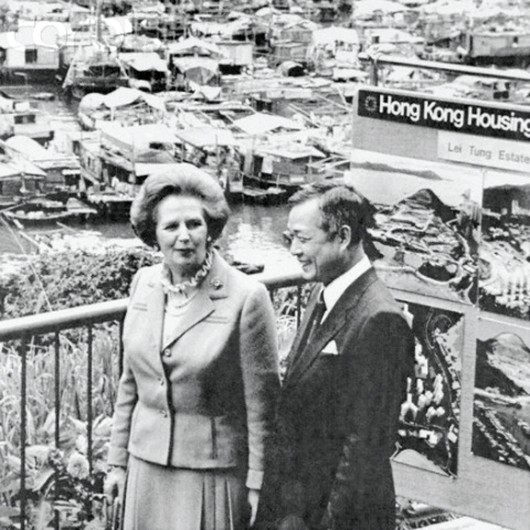 Margaret Thatcher, the outspoken former Prime Minister who transformed Great Britain during her stewardship of the country from 1979 to 1990 and inspired the global conservative moment during her decade in power, died Monday from a stroke.

Great Britain’s only woman prime minister, the so-called Iron Lady led the Conservative Party to three electoral victories in a streak that was the longest continuous period in office by a British premier since the early nineteenth century.

Thatcher, 87, remained an extremely divisive figure in Great Britain despite stepping away from public office in 1990, continuing to provoke visceral emotional reactions and passionate debate on her native turf and throughout the Commonwealth.

The rival Labour Party decried Thatcher’s drastic reduction of union rights and stripping away of state control, policies that manifested themselves in the Conservative Party’s dismantling of the traditional industrial base and privatization of nationalized industries.

Critics also claimed that her policies were draconian and destroyed traditional working class strongholds, a claim made more salient by her famous assertion that “there is no such thing as society — there are individual men and women and there are families.”

The introduction of a controversial flat tax in 1989 that was said to disproportionately affect the working class later led to localized rioting at the end of her tenure as Prime Minister.

Her supporters, for their part, argued that Thatcher was the catalyst that the nation needed to reenergize after a long period of national decay. She snapped the union grip that was said to be holding back the economy, they argued, and she put the boots to the country’s stagnant brand of leftist entitlement ethics.

And in terms of her dismantling of the traditional industrial base, well, that was finished, anyway, and by delivering the knockout punch, the grocer’s daughter and former research chemist cleared the way for the growth of a strong free-market economy fueled by private investment and entrepreneurship.

The Chinese are likely to be familiar with Thatcher as a result of her role as the foreign leader who went head-to-head with political heavyweights Deng Xiaoping and Zhao Ziyang in a last-ditch effort to hold on to Hong Kong, then a British colony, before she capitulated and signed the Sino-British Joint Declaration in December 1984 under which Great Britain agreed to hand over Hong Kong to China in 1997 after 150 years of British colonial rule.

For more information on those meetings, read Henry Kissinger’s On China or Robert Cottrell’s excellent The End of Hong Kong: The Secret Diplomacy of Imperial Retreat. Both are invaluable resources. But we go for low-hanging fruit — often more digestible — so below we present the five juiciest China-related tidbits from the Baroness’ long life in public service.

Thatcher fell down the stairs at the Great Hall of the People
Let’s just get this out of the way: While exiting a farewell banquet at the Great Hall of the People in 1982, Battlin’ Maggie took a tumble and fell to her knees in front of the waiting television cameras and foreign press corps. We’ve all had a maotai-induced stumble, natch, just from less-storied stairwells — like at Propaganda or your subterranean Sanlitun shithole of choice.

She was an early advocate against the Great Firewall
Thatcher pressed the CCP on a free and open Internet as early as 1996. In a speech given to gathered officials in Beijing in November of that year, the former Prime Minister expressed “dismay” at harsh sentences for dissidents, referenced Qin-era book-burning and warned China not to block Internet access, predicting that economic reform was “bound to lead in time to change in the way in which China is governed.”

She lobbied against serving sea slugs and shark fins to senior-level cadres
The Iron Lady argued with Foreign Office staffers as to whether sea slugs, jam sandwiches and shark fin should be served at a banquet for Chinese dignitaries in 1982. Why? Just to save a few kuai. We all know how that feast turned out. And to add insult to injury, Good Guy Zhao was the only senior-level official to join the event after the exceedingly-frosty negotiation process. The rest opted to attend the competing diplomatic bash held in the same building — a reception for one Kim Il-sung.

Thatcher bonded with senior-level officials in 1977 over a shared contempt toward trade unions
While she didn’t assume the office of the Prime Minister until 1979, the then-head of the Conservative Party was invited to China in April 1977 because the authorities saw her as a likely government leader — one who was staunchly anti-Soviet expansion, to boot — with whom they should preemptively become acquainted. In a country that was still swirling in palace intrigue after Chairman Mao’s death and the demise of the Gang of Four six months earlier, Thatcher broke bread with senior-level officials, including Deputy Prime Minister Li Xiannian and Chairman Hua Guofeng, over the shared belief that allowing trade unions to interfere in national politics was dangerous and to be avoided at all costs. Both, as we know, eventually made good on their promises.

She continued to lament the one that got away
In a 2007 radio interview, the octogenarian uncharacteristically expressed sadness at the 1997 handover, revealing that she wanted a continuation of British administration in Hong Kong. “But when this proved impossible,” she said, “I saw the opportunity to preserve most of what was unique to Hong Kong through applying Mr. Deng’s ideas to our circumstances. I was very sad, but one didn’t want to start intruding again at that time. People wouldn’t have liked it, and quite understandably they wouldn’t.”

What do you think about Margaret Thatcher’s legacy? Let us know in the comments section below.