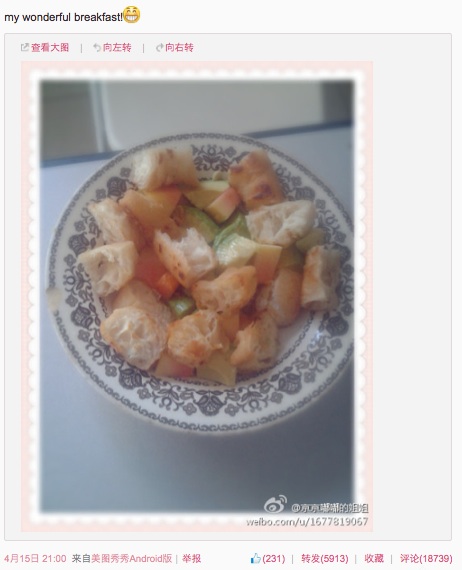 In a Sina Weibo post dated April 15, 9 am Eastern Time, Lu Lingzi, a graduate student at Boston University, published a photo of Chinese fried bread under a simple line of English:

It would be her final post. Less than six hours later, she would be near the finish line of the Boston Marathon on Boylston Street when the bombs went off.

All but official sources have confirmed that Lu is the third victim, joining Martin Richard and Krystle Campbell. (Another Chinese national, Zhou Danling, was injured but is now in stable condition.) The New York Times reports:

Even without government confirmation that Ms. Lu was killed in the bomb blast on Monday, Chinese Internet sites filled with mournful messages about a woman in her mid-twenties whose ambitions took her from a rust-belt hometown of Shenyang to Beijing and then the United States. Her account on Weibo, a Twitter-like Chinese service used by tens of millions of people, attracted more than 10,000 messages, mostly of condolence, in the hours after Chinese media widely reported her death.

“You are in heaven now, where there are no bombs,” said one typical message.

The vast majority of Chinese netizens are expressing sympathy today on social media and elsewhere, but a small, vocal minority have lashed out. Some have gone so far as to say the victim “deserved it,” but as Tea Leaf Nation explains, “Ultimately, these hateful comments are not directly targeted at the victim of this terrible tragedy, but only reflect the common resentment against income inequality and social disparity in China’s today.”

More reactions can be seen on Offbeat China, which was the first to translate online comments on the day of the bombings.

Meanwhile, at a press conference in Beijing today, Chinese Foreign Ministry Spokeswoman Hua Chunying had this to say about the Chinese victims, via NYT:

“Chinese leaders and the government are very concerned about the tragic death of a Chinese student and the severe injury of another in the Boston Marathon bombing case on April 15th,” Ms. Hua told reporters. She said the surviving student suffered serious injuries, but her “condition is quite stable.”

Note: the Lu surname is 吕, which in pinyin is Lü, which is why some sources have rendered her name as “Lv Lingzi.” 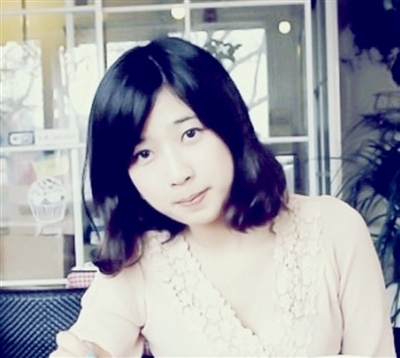 China Mourns the Death of a Student in Boston Blast (NYT)

One Response to “Here’s The Final Sina Weibo Post By Lu Lingzi, The Third Victim In The Boston Marathon Bombing”