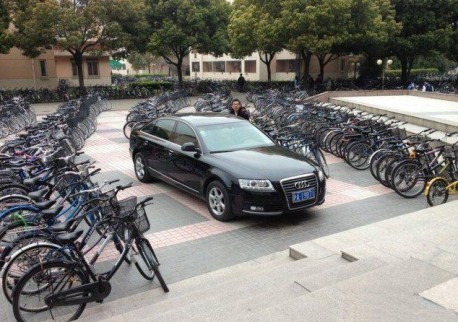 Via Car News China: “An Audi driver in China had to be at the Shanghai University, on Sunday… when he came back on Monday morning, he had a big problem…”

April Fools Day links, with none of the foolery. Go time.

China not an easy place to be as a journalist on April Fool's Day. So much is so plausible.

On Lei Feng, the “yeti.” “The China scholar Michel Bonnin told me recently, ‘I had always harbored doubts about the reality of the existence of a soldier called Lei Feng, but I have now changed my mind.’ Bonnin has come to believe that ‘Lei Feng was real and fake.’ He was a man, most likely, but also a myth—the perfect mascot of his moment. ‘This is testimony for the propaganda genius of Mao’s China,’ Bonnin said. ‘It is a pity that Mao and his comrades were less inspired, at the time, in solving problems of the real world.’” (Evan Osnos, The New Yorker)

China’s schools should be dropout factories, but aren’t? “China may have the lowest college dropout rate in the world. Some chalk this up to the success of China’s rigorous college entrance exam and family support systems. But others say the country’s universities have become too easy and are producing a glut of graduates that are saturating an already dismal job market.” (Eric Fish, The Economic Observer)

Shudder. “Doctor Xie Lihua at Shenzhen Number Two People Hospital found there were only two places on Yang’s body that had escaped serious burns: his scalp, and his penis. // Xie, of course, turned to the scalp first. He scissored some of the skin and soaked it in salt water. Only 1% of skin can cover 10% of the burned area. Furthermore, the skin can easily expand evenly. But it turned out using his scalp was not enough, so Doctor Xie finally sought the last straw –Yang’s penis.” (The Nanfang)

Hong Kong people ashamed to get freebies? “You might still remember how McDonald’s gave away 5 million of McMuffins on their International Breakfast Day on Mar 18th of 2013 all over the world. Those burgers could build a mountain. But what intrigued you and me might not be how high the burger mountain could be, nor the zillions of  calories increase McDonald’s had brought to the world on a Monday morning. It’s how different people around the world queued up for free burgers that amazed me. // The picture above shows how Hong Kong people tried to hide their faces when they were lining up for free burgers. No matter they were adults, elderly or even students, they all used their newspaper (that called them to line up for burgers) to block themselves from the camera.” (Jin Wong, HK Girl Talk)

Filipinos crucify and flagellate themselves on Easter. The Chinese aren’t quite at that level yet. “If past years are anything to go by, thousands of Chinese were to be baptized Catholic on Easter Sunday, in a reflection of an increasingly intense search for spirituality in an officially atheist nation.” (Rendezvous, NYT)

Only one home for you if you’re single. “China’s capital, Beijing, banned single-person households from buying more than one residence and increased the minimum down-payment for all buyers of second homes as the government seeks to cool the property market.” (Bloomberg)

@beijingcream maybe this is what brad Pitt meant when he made that cryptic post about coming back to china. pic.twitter.com/wAqgLJ3HB8

As noted by @JonathanAlpart, the No. 1 story on r/worldnews right now is from CRI English: http://t.co/04SwpFMY21 pic.twitter.com/lcjGcOSsGZ

“It’s Not a Hermit Kingdom, and 4 Other Myths About North Korea.” (Joel S. Wit and Jenny Town, The Atlantic)

“What’s bitten off of Apple’s logo? A theory from a Chinese law professor.” (Offbeat China)

The heartbreaking story of a golden retriever’s death at the hands of China Southern Airline. (Care for Chinese Animals)

At China Fashion Week, via the Beijinger: 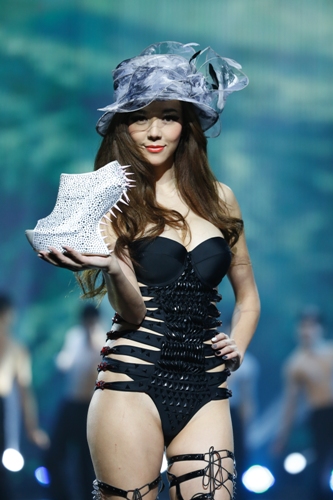