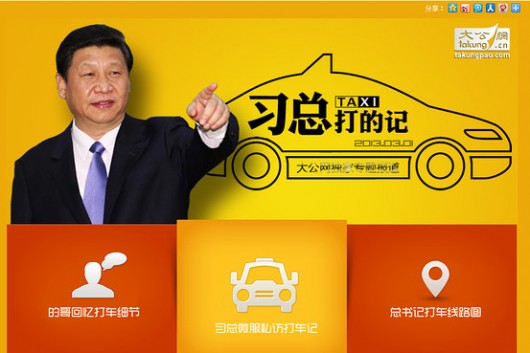 We’ll never know whence or whither Xi Jinping took a taxi on the evening of March 1, 2013, or any of these lengthening twilit evenings of summer-cometh, because who cares?

It turns out, everyone. As Offbeat China relays, “旁观者马勇, professor at the Chinese Academy of Social Sciences, pointed out: ‘The news is fake, and it’s unforgivable. But people’s expectations are real.’” Indeed, if there’s a Chinese politician who has positioned himself to be able to take a cab ride around Xizhimen, it’s Xi Jinping.

If you haven’t read up on it yet, the Hong Kong newspaper Ta Kung Pao reported that president Xi took a taxi on March 1 at Gulou West Street, and ended up tipping the driver 2 kuai at the end of his 26-minute, 8.2-kilometer, 28-kuai journey. Xinhua quick verified the story, because it’s a good one, but almost as quickly repudiated it as “fake news.” SCMP with this summary:

Ta Kung Pao removed the story from its website and issued a statement expressing regret. It said: “There is major fake news that should not be in the paper because of our work errors. We sincerely apologise to readers.” The newspaper gave a vivid account of how Beijing taxi driver Guo Lixin stumbled across Xi and his assistant on March 1, when he took them to the Diaoyutai Hotel during the evening rush hour.

It quoted Guo as saying that at first he could not identify Xi, who was sitting next to him, and asked the passenger: “Has anyone ever told you that you look like general secretary Xi?”

The driver said Xi told him: “You are the first taxi driver to recognise me.”

What have we learned here? Did Guo the taxi driver bamboozle this country’s highest media enterprise, and should he be punished?

Or should the relevant organs take a hint? The people want its leader to be more like the people. Take a cab, politician. If nothing else, as this episode has proven, it’s great PR.

One Response to “Xinhua Verifies, Then Denies Xi Jinping Took A Taxi, Which Is A Shame”