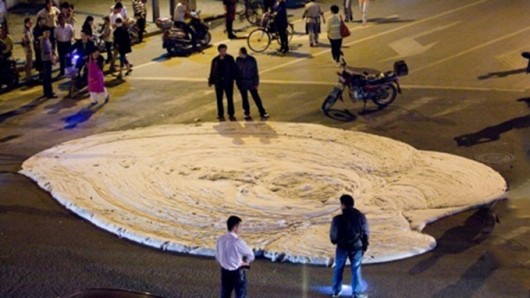 It’s mysterious. It came up, then went down. “Sentient,” said Gawker.

So far, no one has been able to provide locals with a straight answer — so they’ve taken to social networking sites to make up their own.

Immediately following the ooze’s mysterious arrival, authorities arrived at the scene and cordoned off the area, ordering evacuations of nearby homes.

The substance soon retreated back into the street cracks from whence it came, leaving open the very real possibility that it was also sentient.

The Thing appeared on Saturday night, as noted on Longhoo.net, was gone before the morning. It’s harmless — until it chooses not to be.

The local branch of the Propaganda Ministry has since released a statement claiming a material being used to soften the soil for nearby subway construction “accidentally” leaked.

Any guesses for what it can be? Put those creative juices to work, people. Best answer gets a cyber cookie. UPDATE, 5/22, 5:25 pm: Jon Stewart calls it “bird shit and Bisquick” / “corn starch and Foxocnn worker tears.”