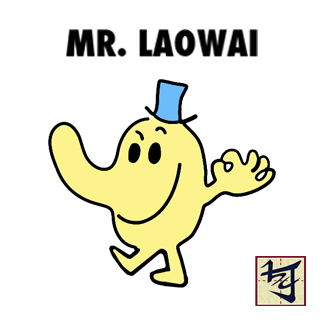 This week we introduced the 2nd annual Beijing Cream Bar and Club Awards (VOTE HERE), with 20 categories divided into four groups. Here’s Kelly Mason, a good foreigner, with a closer look at the group Mr. Laowai.

This category implies an air of naivete that goes with being relatively new to the city, which immediately disqualifies Apothecary and Flamme. They’re wonderful, but the kind of bars you work your way up to after some time.

Heaven’s out. Any wide-eyed, optimistic thinker is completely drowned out by the debaucherous crowds that chose to come to Heaven because it’s like their favorite bar, but cheaper.

Having spent many an evening at good ol’ Great Leap, I can say I’ve met my fair share of delusional do-gooders. One guy actually told me he was trying to implement affordable Christian counseling to Chinese nationals. Eesh.

One-upping Great Leap, though, is Salud. The type of person who is still hopeful about changing China is likely still enamored with Nanluoguxiang and gets excited about the free tapas with a local Chinese beer deal. My vote is Salud.

While both Susu and Amilal are frequented by seasoned foreigners, the Jaded Expat, on the quest to find either one, will likely go from head-shaking frustration to full-on rage. Maison Bouloud might have some rich, complainy expats, but more people go there to celebrate, from what I’ve heard, though I’ve not been myself (gasp!).

My vote is the James Joyce. The other choices offer a brief respite from the hustle and bustle (read: shitty things about China that make foreigners lose their shit from time to time) of Beijing, but the James Joyce is around the corner from Beijing’s Dive Bar District. To be more specific, it’s right next to Heaven. The exact type of hangout for the typical JCH.

Gotta admit, I’ve never actually ever found Más. But that could never one-up my experience of walking into Revolution for the first time. Was there a jukebox? Because I swear it was like the music stopped playing the second I walked in the door and was recognized as an outsider. I think the awkwardly limited seating also made it feel even more like every single person in there was staring at me looking awkward. Or maybe I was just being awkward? No. Never.

You mean you guys don’t take the parents to Smugglers? Weird.

I have to go with Atmosphere. I don’t know about your parents, but mine love that 80th-story lounge type thing. What better place to pretend you’re living large here? The drinks are super expensive and the seating is plush and comfy, and the view is amazing. Well, sometimes. If it’s a smoggy day, here’s your chance to show them the real Beijing and score a free one-way ticket home.

This was a tough one. Union Bar and Grille has a great happy-hour Guinness deal and Homeplate has 10 kuai drafts and outrageously good food (okay, maybe a little Southern bias), and Q Mex and Tim’s, well, they apparently have deals (I’ve never been told wonderful things about their drink deals, so have never been). Don’t get me started on Blue Frog. Their deal sounds great until you try and get a table on half-price burger night, then try to flag someone down to just pleeeease put in your drink order, and then try to finish your two (of the same) drinks before they get warm, and more importantly, before happy hour ends so you can get two more.

Whew. Sorry. Anyway, I’m voting for Kro’s because they have FREE beer. Free! They also give away tons and tons of free booze on Thursday quiz night, and have other deals throughout the week. Oh, and I guess the pizza’s good, too.

Kelly works as a freelancer on a smorgasbord of projects. She can be reached at mason.kelly.m@gmail.com. Her previous piece for BJC was a review of Elton John’s concert.