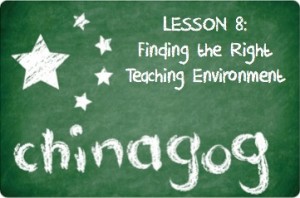 Private language centers are ubiquitous in Asia, and are a major entry point for new teachers in the industry. Asian parents generally place little value on allowing their kids to have happy, productive, adventure-filled childhoods. Instead they focus on making them as academically competitive as possible. When kids somehow manage to eke out a tiny modicum of free time, parents fill it with classes, including, but not limited to, English, math, music, Chinese/Korean/Japanese, Latin dance, elocution, taekwando, and art.

This can be disheartening for a teacher. You’re actively contributing to your students’ kidnapped childhoods. Parents aren’t necessarily sophisticated consumers, either, and can have strange (or nonexistent) expectations for what constitutes a quality lesson. Unlike the Middle East, where most positions require a Master’s degree and teaching experience, many parents and schools here are just happy to have a white (or native-speaking) person instructing their kids. Schools often provide little direction for new teachers. My Chinese boss told me before my first TEFL class, for which I’d been given no materials or lesson plan, to “provide interesting lesson.” The lesson I’d spent a half an hour writing fell apart after ten minutes and we ended in disaster, and, at the students’ suggestion, we played the game “1 to 99″ for most of the rest of class. I ended up finding a mentor who helped make me the teacher I am today, but starting out as a teacher can feel like being thrown in the pool right after someone chops your arms off.

Induction as a teacher in this kind of environment can be frustrating, but it also comes with a high ceiling for professional development. Larger chains can offer a clear path of career advancement, from senior teacher straight into academic management. These jobs can be stimulating, but they also involve getting back into office politics, which is one of the reasons I left corporate America in the first place.

One of the best things about teaching, especially TEFL abroad, is the high degree of autonomy you’re given. How successful you are in the classroom rests entirely on you. You do research, seek out help from more experienced teachers and managers, experiment with new teaching techniques. You certainly don’t have to do it alone, but there’s no one standing in the way of your success. The floor is low as well, and there are plenty of examples of teachers delivering the same boring lessons day-in and day-out. They never improve, and they never get fired, because at the end of the day it’s easier for the school to keep them on for years at a time than finding an unreliable replacement abroad. These teachers are often pretty miserable. Putting in a modicum of effort into learning how to teach when you start is a surefire way to avoid becoming “that guy.”

Getting into the management route means working much more closely and relying on the managerial acumen of the owners and local managers of the school, which can quickly turn into a disorganized nightmare. Several factors can affect this. For one, the TEFL industry in China is a relatively new business. The market for classes varies across cities and incomes, and a lot of school managers tend to come from a public school background. They’re oftentimes unfamiliar with managing a business and can be stubbornly ignorant of what makes an effective TEFL teacher. White skin and youth are prized, even though teaching experience, training in methodology and time spent learning a second language (like English) have a much greater effect on making a good teacher. There’s often a distinct push and pull between effective directors of studies and local management, even when they share the goal of running a successful school, with “You don’t understand Chinese culture” often ending a disagreement.

Some people can thrive in that environment, and, actually, advancing in the TEFL industry (like most workplaces around the world) requires dealing with incompetent coworkers and managers, no matter the locale. I’ve heard stories about, and worked at, schools with management problems around the world, including Korea and Japan (similar problems with China), the Middle East, Europe and even the United States.

I still personally prefer private language education, as public language education is still woefully behind current teaching theory. Still, there are decent enough jobs to be had in China outside of private language mills. I’ve known a lot of people who quite enjoy life working at a university. The pay is often at the bottom of the TEFL scale, “professors” work ten to fifteen hours a week and receive generous blocs of time off. You get to work with half-adults, and there are quite a few Chinese college students who are searching for a non-academic way to use English. Their English teachers is a great utility for that.

At the same time, there’s a good chance you’ll be “teaching” in a lecture hall filled with 90 kids sleeping or dicking around on their cell phones and a group of 10 English nerds sitting up front and hanging on your every word. The university teachers I’ve talked to emphasized the latter as their reason for teaching excellent lessons every day, but I know I’d be discouraged by the low percentage of people I was actually educating. The small class sizes you can teach in a private language school (for both kids and adults) create peer pressure that encourages apathetic students to maintain a minimum level of participation. There’s also little room for advancement. While private language schools often offer little teacher support, universities offer even less, and there’s little feedback from administrators, positive or negative. I enjoy the day-to-day satisfaction of teaching, but it’s when students start showing chartable progress over a longer period of time that I know I’m doing my job right. You don’t really get that at a university. And while it can be quite chuffing to put “professor” on your business card, teaching at a Chinese university lends little industry credibility, especially compared to similar positions in Korea and Japan where professors need to have the resume of, well, a professor to get hired.

The public-school teaching I did in Chinese primary schools was equally frustrating. The “small classes” had a minimum of forty kids, and I’ve taught classes with more than eighty students, none of them for longer than forty minutes at a time. Lots of low-end flashcard games and yelling “cat” and “dog” back and forth. The pay can be decent depending on the school, but the Chinese education system is not at the moment set up to allow an English teacher in a primary school to achieve much beyond passing a poorly written, standardized Chinglish test.

Finding the right environment to teach in is an exercise in patience, and there’s nothing wrong if you don’t love your first job. I had a fear of teaching kids before I moved to China and was hoping to spend most of my time with adults, but after years of experience teaching both I’ve found that I click better with kids. I would’ve never known that before jumping in. TEFL offers a surprisingly wide variety of environments for teaching English, including young learners, business English, general English for adults, academic English, test preparation… the list goes on for a while. The only way you can figure out what’s right for you is to just jump in and teach, even if it is at a language mill run by idiots.

Previously: A Passionate Defense of Henan, My Adopted Chinese Home

One Response to “Chinagog: Finding The Right Teaching Environment”