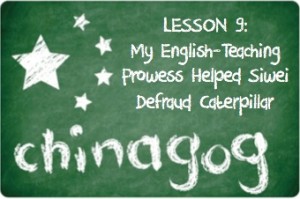 At least, not until earlier this year, when I happened to be reading some random business news. Apparently the company had (somewhat deceptively) managed to get itself acquired by equipment manufacturing giant Caterpillar, which earlier this year reported an 80% writeoff of bad assets due to Siwei’s creative accounting practices. The two companies have since settled, but the entire incident was more than a little unfortunate.

But what a feather in my teaching cap! My colleagues and I were contracted to improve the business English of Siwei’s staff and their ability communicate with foreign companies. That they ended up using this training to ultimately defraud an American company out of millions of dollars was beside the point*: in a profession where measurable results beyond enrollment and student satisfaction are hard to define, my students used their English to achieve their goals.

Student success stories (even backward ones, as in this example) are what drive me to continue teaching and improving as a teacher. A lot of teaching, especially in TEFL, is an exercise in repetition, at least in a day-to-day context. According to this paper, “Repetition is an important aid to learning and that having to actively recall or ‘retrieve’ a word is a more effective way of learning than simple exposure or just seeing a word over and over.” I’ve seen official estimates that people need to use a new vocabulary word 15 to 20 times before it’s embedded in their memory. Same goes for grammar, especially for older students with fossilized mistakes, which are deeply ingrained in their language use due to their repeated use without proper correction. With some of my lower-level academic students, explaining why “am/is/are” do not act as a helping verb in simple present conjugation is often a painstaking process, often because simple present and present progressive are taught in too close of a proximity.

However, lower-level students have the capacity to make a lot of progress in a short period of time. Once learners achieve basic mastery of a language, they can hit a frustrating wall, and it becomes harder to track even week-by-week progress. Intermediate learners are in a special kind of limbo where they make marked progress in some areas and lag in others, and each student is different. I’ve been there with my Chinese for almost three years now. My listening is great, my speaking is good-okay, and I’m still functionally illiterate. The challenge of teaching intermediate learners is applying triage to fortyeleven different areas of language and maintaining a class focus. Once students get to the advanced stage, it’s on them to address their needs, and the teacher’s focus should be on providing materials and lessons that challenge the students to set their own language goals. For example, I would teach a set vocabulary group about, say, kitchen appliances to a low-level class. For an advanced class, we might read a challenging text, I’d pre-teach a few important words, challenge them with comprehension questions and clarify any vocabulary they found interesting or got stuck on.

On top of this, student turnover is a weekly occurrence in many TEFL situations, especially in private schools where rolling enrollment is the norm. Student retention is a week-by-week struggle for a lot of private schools. Some classes will retain a core group of students, but students come and go quickly in even the most stable of classes. It’s sometimes hard to tell what works and what doesn’t in such a chaotic teaching environment, and even in the most stable of classes, assessment theory in TESOL has only recently passed beyond the alchemy stage.

With all this in mind, I make sure to write myself a note whenever I hear about a student making a significant achievement in his or her language progress. It can be anything from excelling in an English competition to getting accepted into a Master’s program to being able to translate for other students and hold lively conversations in the language after coming into my class as a low Level 1 learner. Part of it strokes my professional ego, sure, and students themselves bear most of the burden in progressing in their language studies. However, keeping an eye out for improvement and achievement (and failure as well, as there is sadly plenty of that) helps motivate me and makes me understand the parts of my pedagogy that work and what needs to be sent to the bin. Sentence diagrams, anyone? I loved them when I was in high school, but they are goddamned useless. Let’s all admire Rolf and his beautiful dictogloss:

* Just to clarify: I didn’t focus on teaching deception or ethically bankrupt business practices; it was a fairly straightforward course based on Pearson’s Market Leader series. If I were that savvy at scamming people I’d open my own foreign trading company or IELTS prep-cram school in China.

4 Responses to “Chinagog: My English-Teaching Prowess May Have Helped Siwei Defraud Caterpillar”