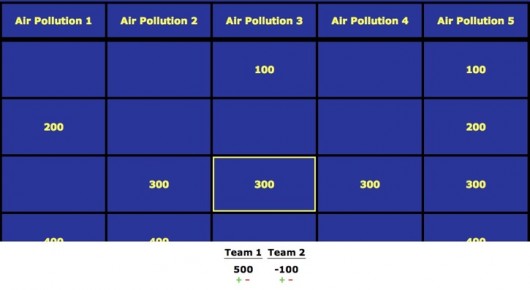 A cheeky someone over at JeopardyLabs, where quiz fans can create their own Jeopardy! game (not to be confused with J-Archive, which has every Jeopardy! question ever), has created a game for China watchers who love talking about pollution. It’s mostly lame, with several true/false and fill-in-the-blank questions that don’t require the answer in the form of a question, but that such a quiz exists is the point.

Anywhere from one to twelve teams can take part in the 25-question round, featuring Q’s such as:

This got us thinking. What other China-themed Jeopardy! categories need to exist?

And so on. Someone make this happen.