The disturbing story surfaced yesterday: six girls from a Hainan province elementary school went missing on May 8, with four found on the 9th and the other two found a day later. “They seemed dazed, some girls have bruise on hand and neck,” reported Free More News, which is generally a reliable source even though it never cites where it gets its info. “Doctors found lower body injury on all six students. From surveillance video, police found out a school principal and a government employee took students to a hotel on the evening of 8th.”

The incident made TV news and was posted on the Internet not long after (embedded above). But a curious thing about all this: authorities seem to acknowledge impropriety — two adults took girls with them into hotel rooms, after all — but no one is calling it sexual assault.

“Later, the press unanimously changed its stories to report the men only took the girls to hotel rooms and did not have sexual relations with them,” reports International Business Times. “The stories avoided the word ‘rape.’ The principal has been fired by the school, and the girls are undergoing one-on-one therapy to help them cope with the incident.”

This has set off a fresh round of debate about China’s lax — one might say nonexistent — statutory rape laws. IBT again:

This is the latest of many scandals involving public servants and underage girls in China, where the age of consent is set at 14. From 2007 to 2008, more than 10 elementary school pupils, many under the age of 14, were forced to prostitute themselves to public officials. Similarly in 2008, nine girls were reportedly forced into prostitution, all of them under 14. In 2009, a high-ranking official in a provincial judicial bureau in Yunnan province slept with underage girls, according to QQ News.

What is most interesting and saddening is that in these cases, perpetrators are not always punished, owing to a loophole in the law. Having sex with anyone under the age of 14 was considered rape in China, consent or not, but the law was changed in 1997. Under this new law, with consent, even if a girl is under 14, the perpetrator may be allowed to go free as long as he claims not to know the girl is under 14. If, in addition, money is involved in the transaction, the perpetrator is usually prosecuted for “patronizing a prostitute,” which usually carries a sentence of five to 15 years in jail, instead of the far more serious crime of rape.

And if you needed more reason to be creeped out by this news, here’s a cartoon that popped up on Sina Weibo: 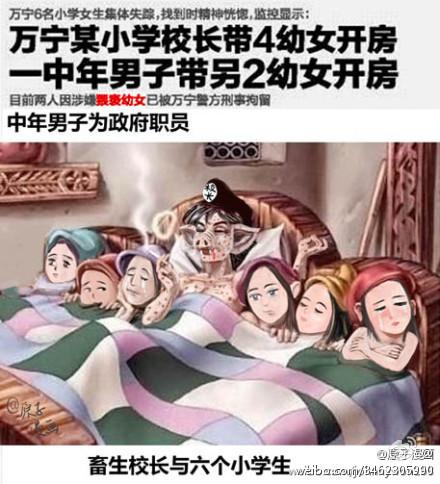 The six primary-six classmates involved initially told authorities that the men, a primary school headmaster and government official had sexually molested – but not raped – them at two different hotels in Hainan province’s Wanning city.

…It was also found on Thursday that one girl was allegedly offered 5,000 yuan (HK$6,300) in the hotel room by the school headmaster, surnamed Chen, after telling her if he wanted “it would only cost him 3,000 yuan to find a virgin to sleep with”, The Beijing News reported in a detailed analysis. The girls involved were aged 11 to 13.