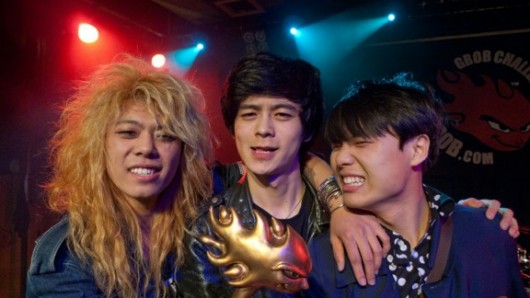 Many fans of Chinese rock music have heard of the band Rustic, the members of which became stars on the scene only a few years ago when they unexpectedly won the Global Battle of the Bands competition in London. They play a catchy blend of cock rock and old-school punk, and their show antics make them one of the must-see acts in Beijing, even if it’s just to see them act like wankers. Surely a lot has been written about them, especially after their founding bassist, Ricky Sixx, left the band apparently to sell real estate, and later guitars.

To my knowledge, no one has ever asked the question of how similar they are to Green Day.

Any Chinese rock fan worth his salt knows there are only four bands that are important in the pantheon: Nirvana, a.k.a. Kurt Cobain, Guns and Rose [sic], Metallic [sic] and Green Day. As Green Day is the most similar out of the four to Rustic’s style, I’ll be reviewing one of their songs based on how much it sounds like Green Day.

Without warning, some highly compressed guitars come in – first from the right channel, then the left – so we know we are finally entering into hardcore punk rock territory. After four bars of “Hey-Ho! Let’s Go!” the drum roll indicates that we indeed are going somewhere.

Billie Joe Armstrong has a very unique voice and a distinct pronunciation of words that has been imitated across the board by punk bands that followed Green Day, and Lucifer’s Chinglish is a very good approximation of this. In fact, now that I think about it, if I had never heard of Green Day I may have assumed that Armstrong was an ESL student from Shandong.

The bass is cushioned very nicely in the mix along with the distorted guitars like some of Mike Dirnt’s best work in “Longview,” and the drums pat and whoosh like Tré Cool on holiday. So far so good – sounding very much like Green Day.

The first verse ends with something like “Break the rules and make the news,” expressing the same kind of rebellious spirit as evidenced in Green Day songs as “21st Century Breakdown” and “Boulevard of Broken Dreams.” What rules? Any rules, because rules are made to be broken! Having learned well from their masters, it is important to reduce teenage irreverence into neatly partionable phrases that are both memorable and easily pronounceable.

Whoa, whoa. After the second round of chorus, there appears to be some kind of “breakdown” indeed, but far from anything in “21st Century Breakdown.” The chords are abrasive and harsh, kind of like “Brain Stew” but much less catchy, and a lot more complicated. I’m not sure what is happening, but I hope it stops soon.

And we’re back! Less than 15 seconds later, Lucifer begins chanting something like “I wan dooey avry dahh,” and it’s almost the exact same progression as the famous pre-chorus riff from “American Idiot.” But then it just fucks it all up by doing something that I can honestly say only sounds vaguely like Green Day. The rest of the song is not even worth describing, a flunky guitar solo that’s completely non-Green Day, and a chorus that is only mildly Green Day.

One Response to “How Similar Is Rustic To Green Day? Chinese Bands In Context”