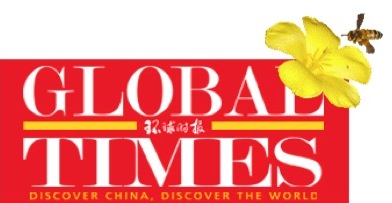 The information that follows was compiled by BJC editor-at-large RFH after a chat with the shadowy Tan Guan, whose position at Global Times is unknown. All views expressed below are to be…

A certain article in a particular newspaper has caused some people on the Western Internet to debate so-called “virginity values.” Yesterday, even the WSJ China editor chimed in on Sina Weibo: “How was a misogynistic article like this published?” this person asked.*

It is a good question, the answer to which can be found in the words of this masthead: “Global Times.” This newspaper embraces diverse views from around China that are both sexist and misogynist.

Our chief editor swiftly demonstrated this, with his reasonable and fair placement of the female author of the controversial article under a bus moving at slow speed.**

It is clear that the editor who commissioned the piece is a fool; luckily, he is also foreign (QED). But a rising star writer shouldn’t have her wings clipped over a trivial incident. The author is a Chinese woman of intelligence. She can, surely, say what she thinks? This is a free country under rule of law. We value our public intellectuals; certainly, we scrutinize them very closely.

Does it upset certain foreign commentators if what writers say don’t measure up to the feisty, independent tone we expect from, for example, an article about leftover women written by the Western press? Let’s face it: virgins can be a hassle after deflowering. That’s why I always leave promptly once they are asleep. That way, I get to enjoy my Chinese dream and they get to enjoy theirs.

That Ms. Kwok wrote her piece under a pseudonym may or may not have created the problem. It is better to assume it was tongue in cheek, but she values her privacy. As to Ms. Kwok, I wish she could stand up in own defense (even though the article was printed in a “Billy No Mates” section of the paper called Two Cents*** that no more represents its voice than Eric X Li speaks for the New York Times). But this is China and Ms. Kwok has been harmonized with the help of the foreign press.

For a member of the “free media” to say a nationalistic newspaper should or shouldn’t be printing diverse opinions surely demonstrates the hypocrisy of the West in browbeating China and Chinese women (especially virgins)!

This newspaper has a proud history of pranking China-based journalists with our famous ex-columnists Alessandro and Hao Leifeng, both now enjoying vacation-style therapy. It is clear that our website is in need of urgent development to meet these modern satirical needs, lest one falls victims to the Rule of Poe’s Law – which is a Western value and not universal.

Chinese media must surely be allowed to be indelicate, playful, and jesting, to tease readers with tantalizing questions such as: is pseudo-misogyny acceptable if used ironically, and by a well-adjusted modern Chinese woman?

“GT English published an article ‘Don’t Sleep with a Virgin,’” said the WSJ post. “For a patriotic, or more precisely, nationalistic media, this piece was totally anti-nationalistic. It says ‘Chinese women are as toxic as the Beijing smog’ and ‘women are like condoms. They can be annoying sometimes, but you can’t have sex without them.’”

“An article on GT English triggered some controversies. I read the article and agreed with some colleagues at GT English that some of the closing remarks were inappropriate. We also agreed that writings like this should be avoided in the future. We also talked with the author and the editor on duty. But Ms Yuan Li’s comment was a bit too harsh: an inappropriate piece on Metro Page of the English edition, ‘anti-nationalistic’? Putting labels on things doesn’t seem to be appropriate for a chief editor either.”

*** “Two Cents in no way represents the opinions of the Global Times or its editors. Rather, it provides a nice little earner for a few local freelancers, folks at the paper, their mates, aspiring writer types, their mates, English teachers, their mates, etc.”

2 Responses to ““It’s Good To Sleep With Virgins”: A Global Times Editorial That Never Was”