Ed’s note: This year’s Beijing Midi Festival was held from April 29 to May 1. Our video editor Gabriel Clermont made the trek all the way out to Changping Pinggu District to take a look.

Last week I got an invite to roll with some musician buddies up at Midi Festival and decided it’d be a great opportunity to grab a camera and capture the people and fashions that only “the biggest rock festival” in China can provide.

Undeterred by the lack of a fucking functional website, the promise of awe-inspiring traffic, and the threat of hours of shitty metal, I took a whiskey-soaked ride up to the Beijing Yuyang International Ski Resort and brought back photos from the Pulp Fiction/Sid and Nancy/The Last Waltz/skate video some kids from Ohio would make/Betty Boop/Hot Topic Lookbook fever dream that was Midi Festival 2013.

First up, just a great mix of people tenting it up… 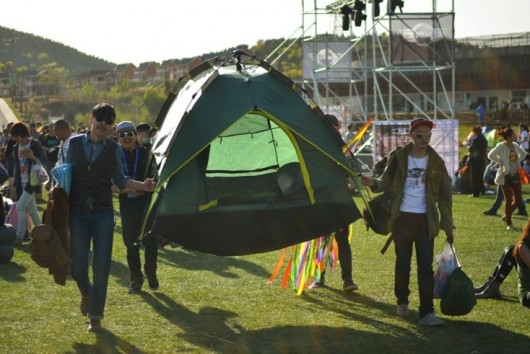 …love that both dudes on the left got the “cowboy attire” memo and brought very different interpretations to the table. 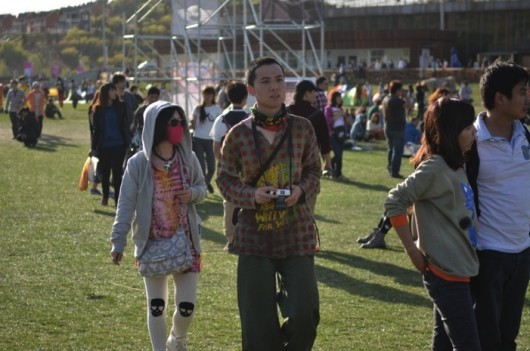 It was only after I’d been working on this — …photo-essay? vertical slideshow? whatever, anyway, looking at the above picture — for a while did I realize that her shirt also said “Will work for weed.” Loving the heart eye-socketed skull kneepads. 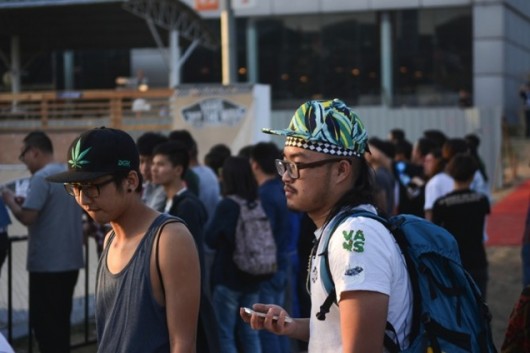 Believe it or not, marijuana was a popular motif at the festival. 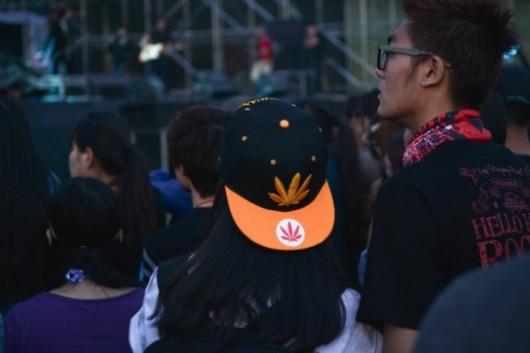 I think this next photo is most representative of the Midi experience: beautiful verdant hills, trash everywhere, inexplicable headwear decisions. 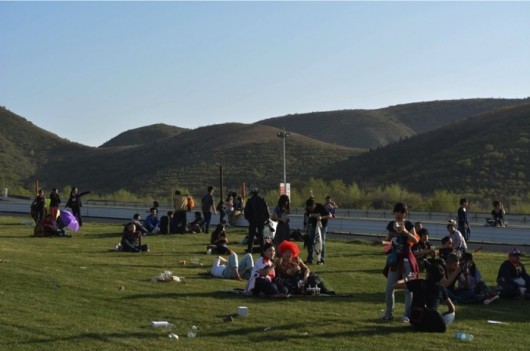 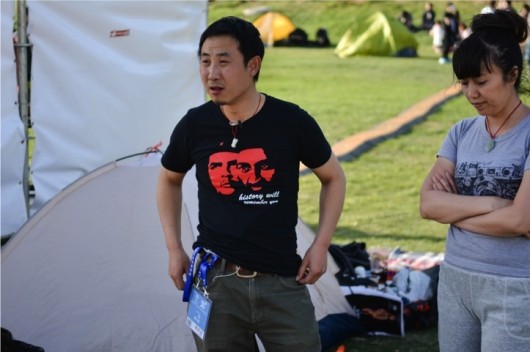 “History will remember you” Woof. 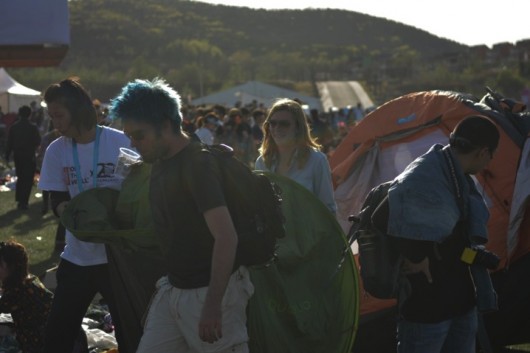 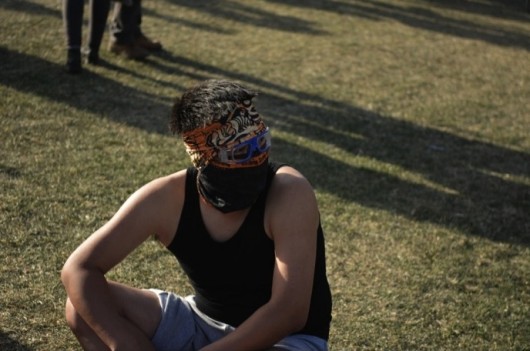 Okay, we come across persons in our meanderings whom we recognize utilize a decision-making process so unlike your own, their mere presence on earth confirms that we inhabit a vast, diverse, seemingly unfathomable existence. Dude rocking a tiger silk-screened face-scarf and high-school lab-issued safety goggles is that person for me. 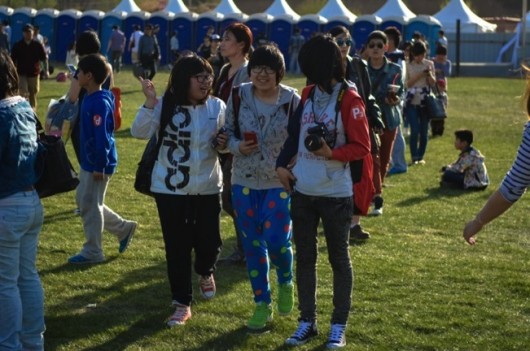 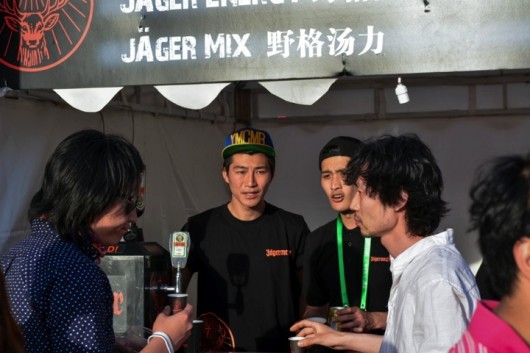 I’m somebody who owned his fair share (a lot) of Rocawear and Sean John in high school, but you couldn’t have paid me to wear someone’s goddamn record label across my head. And especially not when their newest single is this tepid mess. Sorry, but you’ve got to be a fucking clown to wear a goddamn YMCMB hat. 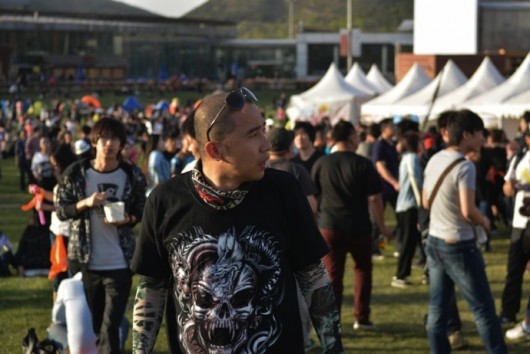 I’m still mad I had to listen to that Tapout nonsense, so I’m going to make this short. Slip-on fake tattoo sleeves are the Confucius Peace Prize/Obama’s backbone when battling House Republicans/Avicii of the body modification scene. 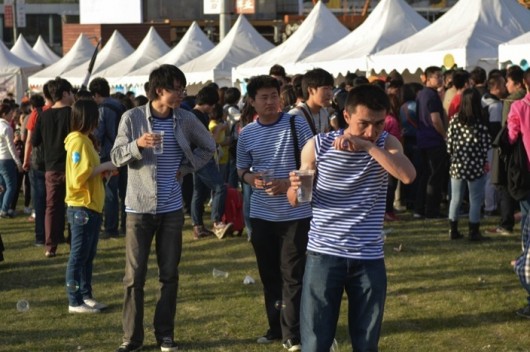 They weren’t in uniform for anything, they weren’t working a stand, they were just three bros rocking the same shirt at a music festival. But wait, let’s consult some Chinese Rock literature: “Of course, the influence of my idol was obvious: just like Kurt, I never neglected to drop a ‘shit’ or a ‘fuck’ into my songs and soon I began aping Cobain’s blue-and-white striped sailor shirt and ripped jeans look. Fortunately, the Chinese navy uniform was based on that of the British army, so the military surplus stores in China were full of striped sailor shirts just like Kurt’s.” — Liu Jian (刘健), Rock Soldier (战士)

So these dudes are rocking the original Chinese rock and roll shirt. O-fucking-G.

Who knew you’d learn something on Beijing Cream today. 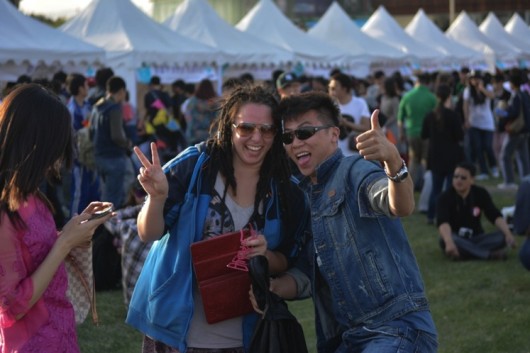 Ostensibly friendly, but as a rule, I don’t trust any white people with dreads or people wearing Canadian tuxedos. 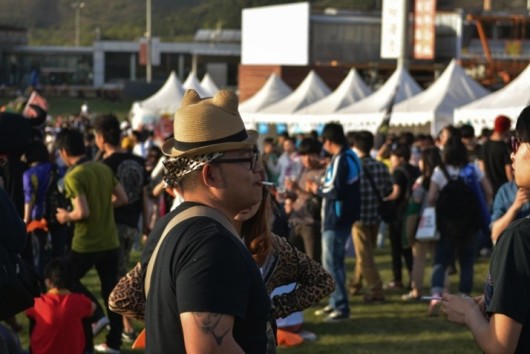 Great headwear. Big fan of the subtle him/hers matching leopard print. Also a big fan of the possible vag tattoo Selina Kyle is rocking next to the dead-eyed disembodied head on his arm there. 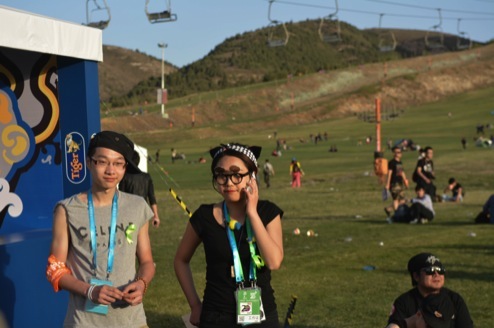 Only when I was going back through my pictures did I realize I took a picture of this couple twice, apparently thrown off by Mathilda’s transforming Leon: The Professional shades. Here’s the second time: 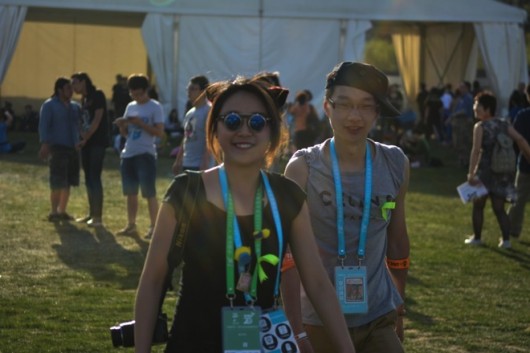 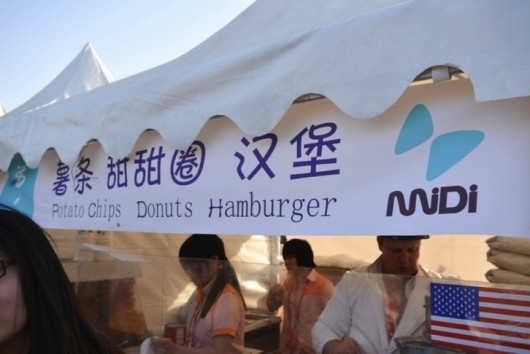 By far, the biggest missed opportunity of the day was neglecting to ask the FuWuYuan to combine all three into some kind of Elvis-themed American mouth bomb. But…wait a second, there’s something weird going on with that flag. Can we enhance? ENHANCE! 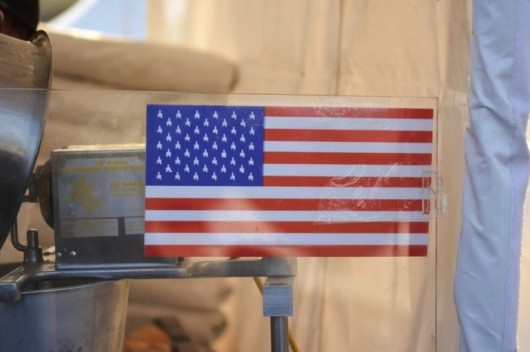 While it’s possible (likely) those non-stars are just the result of a shitty printing job, I’d rather assume it’s a limited edition Robert G. Heft x Invader sticker. Way better than the Jacques-Louis David x Mr. Brainwash print that is just the French flag splashed by a grad student/intern with a bucket of neon green paint. 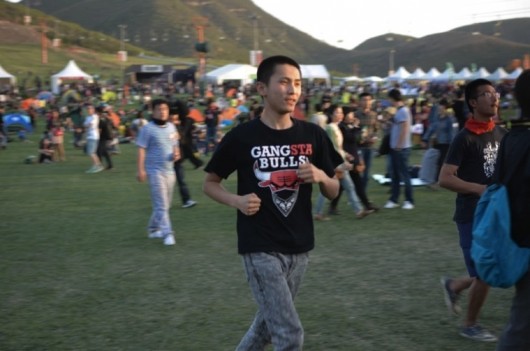 I’ve been seeing this logo around, and I’ve been trying to figure it out. Mostly, why the Bulls? Have you seen the Bulls? They start two Dukies, the son of a French tennis pro, Kurt Heinrich, and a guy who tweets about making his own sushi. (To be fair, Jimmy Butler got abandoned by both of his parents by the time he was 13 and ended up a first-round draft pick, but still, 20% gangsta does not cut it.) So, right, not exactly the Jailblazers. [Note - this was written after the Bulls embarrassed my fucking Nets, and before they came out big-dick-swinging against the Heat.] Then what? Weird, slightly off-color, social commentary on the appalling Chicago murder rate? That would be… peculiar, but further digging reveals, alas. 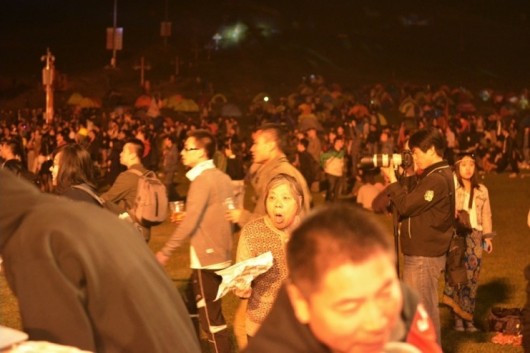 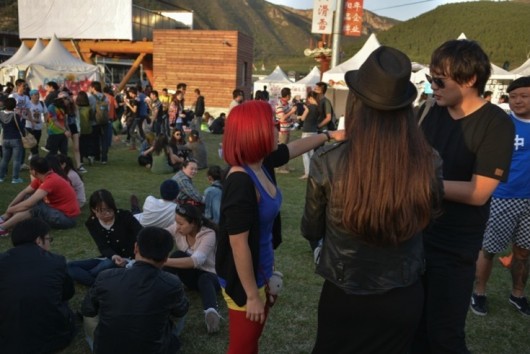 “Yo, that chick was kind of hot but kind of looked like Ronald McDonald.” — One of my aforementioned musician friends. 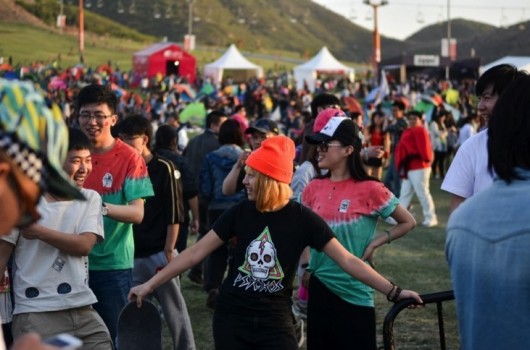 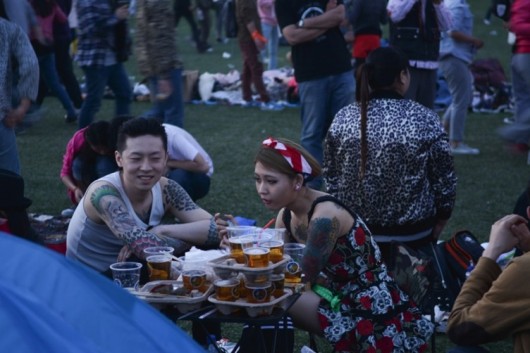 And finally,  let’s bring it home here. A lot to unpack. Sartorially, we’ve got a US flag bandana, the classic Chinese girl cute/morbid smiling skulls with roses, some solid tattoo work, a pink heart earring, and a lip stud. Homeboy has a great collection of random patterns inked on his arms, and then some sort of ICP clown head. We also have two, possibly three instances of leopard print going on in this picture, because, as those of us following the trends out of the fashion mecca Bangalore know, “2013 has anyways been dedicated to animal prints with many international apparel designers embracing the trend. Their inspiration has been the Chinese calendar which marks 2013 as the year of the snake.”

All that said, I think this picture best captures the essence of disparate styles and influences that Voltrons into a coherent culture. Despite our understanding of how or why an “authentic” scene is constructed. So yeah, while rock and roll in China was only introduced 30 years ago by a Korean (minority) in Beijing, and seems to be solely inhabited by people who dress by Baidu image searching “rock fashion” and buying just whatever appears on the screen, the experience of being amongst this energized community on the hills couldn’t help but give you the sense that there’s something real here, even if it looks nothing like we imagine (but for the most part sounds exactly like you imagine, which is a whole other blog post).

And anyway, sixty years of intimate engagement with the history and presence of rock and roll in the West has culminated with the Coldplay afterbirth that is Imagine Dragons, so I mean, like, fuck, whatever, you know?

Gabriel Clermont is BJC’s video editor. Follow him on Twitter @gabrieltrane and check out his work on Three Shots With.