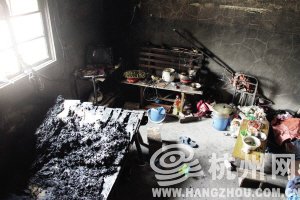 Warning: this story contains stupid parents, neighbors, landlords and police, and is sure to anger you.

An 8-year old girl known to play with fire burned to death while shut in her home outside Hangzhou, Zhejiang province yesterday after her parents locked her in alone and left for work.

The charred remains of the child were found after two young men nearby were alerted by a neighbor who smelled the smoke and cried for help. The pair kicked down the locked door and put out the fire before firefighters arrived, according to Zhejiang News.

It took nearly 30 washbasins of water and 20 minutes to put out the fire, one of the men surnamed Xu, an employee at a nearby plastics factory, told the paper.

Firefighters arrived soon after and discovered the body on the family’s burnt bed. Though authorities are still investigating the cause of the blaze, neighbors claim they had seen the child playing with fire days before.

The father, a 48-year old textile factory employee surnamed Pan from Henan province, routinely locked the child in their apartment before leaving for work every morning with the child’s mother, according to tenants.

“I warned them that’s not a good idea, they’d be better off taking her to the factory with them,” said one neighbor surnamed Wang with perfect hindsight, adding she had repeatedly scolded the child for playing with matches.

“A few days ago, some neighbors saw the girl lighting newspapers and throwing them from the window,” said another tenant. “Everyone was scared, because all these rooms are separated by wooden walls. If there was a fire, it would probably burn the whole house up.”

The neighbors allegedly complained to the landlord about the child’s behavior, who warned the parents to remove lighters before leaving the child alone, according to the report.

The article does not mention whether police arrested the parents for child negligence, or any charges for that matter.