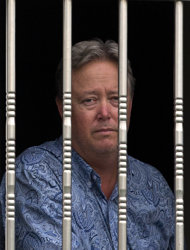 Chip Starnes, 42, is having a hell of a week. He was able to send an SOS to Associated Press reporters on Monday — through bars in a first-floor office window, apparently — that he was being held captive by nearly 100 workers at a medical supply plant in Beijing who are demanding better severance packages.

“I feel like a trapped animal,” Starnes told The Associated Press on Monday from his first-floor office window, while holding onto the window’s bars. “I think it’s inhumane what is going on right now. I have been in this area for 10 years and created a lot of jobs and I would never have thought in my wildest imagination something like this would happen.”

“It is not rare in China for managers to be held by workers demanding back pay or other benefits, often from their Chinese owners, though occasionally also involving foreign bosses,” AP notes.

The president of the American Chamber of Commerce in China didn’t seem too concerned.

Christian Murck… said he wasn’t familiar with Starnes’ case, but that such hostage-taking was “not a major problem” for the foreign business community.

It just happens to be a major problem for Starnes, poor guy.

The workers were expecting wire transfers by Tuesday, he said, adding that about 80 of them had been blocking every exit around the clock and depriving him of sleep by shining bright lights and banging on windows of his office. He declined to clarify the amount, saying he wanted to keep it confidential.

Here’s a video via Financial Times, as dug up by Shanghaiist:

US factory boss held hostage by workers in Beijing (AP)

Chip Starnes, the medical supply company executive detained by his own employees in China, said Thursday night that he “felt like an animal in a zoo” for the six days he was held captive before the workers and the company reached a compensation agreement.

The experience hasn’t soured him on China. That’s the spirit.

Starnes, 42, chief executive of Specialty Medical Supplies, arrived late Thursday at the Newark, N.J., airport after fleeing the Beijing-area factory in a spy movie escape. Despite his ordeal, he told CNBC in an interview at the airport that he would be back at work Friday and fully intended to return to China.

“Going back to China is a must,” Starnes said as he awaited a connecting flight that would take him home to Coral Springs, Fla. “We’ve got millions of dollars of equipment there. We’ve got a large investment there, so we’ve got to see it through.”