I spent my last 30 minutes at the 2nd annual Beijing Craft Beer Festival sitting behind a desk under the LGBT Resource Center tent handing out fliers and chatting with curious Chinese onlookers and expats happy to see the table. (How drunk was I? You decide.) Ni hao, women shi Beijing TongZhi ZhongXin, we announced to a curious child and his semi-interested mother. Her eyes snapped to a rainbow-patterned poster, then to the two smiling foreigners sitting in front of her. With the speed and grace of a defensive tackle scooping up a fumble, lady disappeared with child.

Not a minute later, a separate young mother had her two daughters each put 10 kuai into the donations box. Scurrying and donating — it was like that all evening, and the organizers were just fine with that.

I’m guessing that the majority of readers, especially those outside of Beijing, mostly know about the beer festival because of the dust-up between the LGBT Center and Soho management, in which a mid-level manager — since reprimanded — wrote that LGBT members might “not fit with the site’s architecture.” Well, the Center was there. No protest. No glitterbombing. The architecture seemed fine.

Earlier that evening, when I approached the tent and said I wanted to get some quotes for an article, I was cheerfully yet firmly directed to turn off my recorder and wait for Stepehen Leonelli, the development and operations director of the Beijing LGBT Center. Arriving with a beer in hand, he made it clear that his organization never intended to have a public spat with Soho. I noticed a pile of That’s Beijing magazines — the guys who broke the original story – and was made to understand that their story wasn’t necessarily welcome.

“I understand there’s a tension within these journalists because they want to write about a subject that’s very sensational,” Leonelli said. But when the story broke, he added, LGBT had already been in talks with the people at Great Leap Brewing — the primary organizers of the beer festival — and Soho management to ensure that the LGBTQ community would be there.

The LGBT Center eventually got a formal apology from Soho, which said they have an anti-discrimination policy. The Center pushed for Soho’s policy to include a specific clause stating that the company doesn’t discriminate against sexual orientation or gender identity, but as Leonelli put it, “in China, generally speaking, we’re not there yet.” They had, however, been getting a positive response at the festival, and received lots of donations. 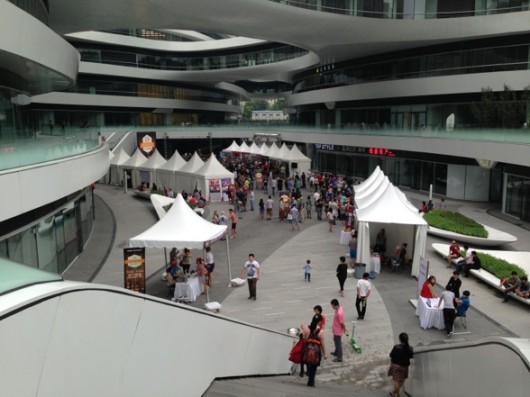 Galaxy Soho comprises the three bleached-white honeycombs designed by Zaha Hadid, known for being empty and holding events. The space felt large and cozy, with sterile office complexes surrounding beer and food tents (Taco Bar came back!). “Embrace Zaha. We are in her womb. You are Zaha,” is how one expat described the experience. My bad for not thinking to check if she was on anything at the moment.

She was certainly drunk though, as were most of the 4,500 people who made their way through the festival despite the early rain and ominous skies. “It’s great to get all the best brews in one place in a very convenient way,” another friend said. “It is a very convenient way to get drunk.”

Organized by Great Leap Brewing and SeeDiceGo (the recently publicized name for Candice Lee’s event-throwing crew, which, according to Lee, is probably throwing its last party), the festival crowd appeared pretty split in their allegiances between GLB and SDG. The tight-pantsed and Ai Weiwei-barbered opinion leaders and social media gurus from C-Dice’s chili cook-off and bowling league formed one group, while the cargo-shorted, non-flat-brimmed hat-wearing older crowd with wife and children in tow (“Goddamnit Starry, I didn’t buy a motherflippin’ 4,000 kuai double-stroller so you and your girlfriends could just shuttle the kids from pilates to The Orchard… YOU call the damn driver, you know he has no idea what I’m saying… Oh can it, if we don’t hit traffic we should make it down from Shunui in an hour and a half!”) formed the other.

They were able to put their differences aside for one thing: the beers, which did not disappoint. While there was some grousing that no one made any special beers for the festival, the range of options, from Beijing stalwarts Great Leap and Slow Boat, to Boxing Cat from Shanghai, as well as beers from two Taiwanese dudes dressed as Germans, provided enough variety to appease even the most capable of drinkers. I showed up having not eaten, quickly put down a Taiwanese beer (bomb), one of the Jing A Strawberry Stouts (…an acquired taste) and two (or three?) Boxing Cats, then all the home-brew beers. I expressed my surprise to one of the home-brewers that without the fancy vats and expensive gear of the bigger breweries, the beer was equally as delicious. He gave me the same look I gave a college friend when she expressed disbelief that they could have yogurt in Africa considering they didn’t have “microscopes and stuff there.” Needless to say, despite the lack of production sophistication and the fact that they often resort to smuggling hops into the country in briefcases, the home-brews delivered. 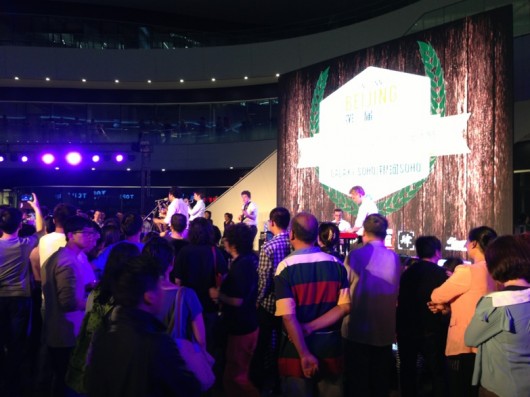 After jamming along to Tavey Lean and the Solid Gold Dream Machine and the Hutong Yellow Weasels/Beijing Pickers, being interviewed for TV, and getting into a highbrow discussion on dating amongst foreigners (“see, all you young dudes are doing it wrong with these Chinese girls. Out here man, I’ve banged my way through the Pac-12, I’ve banged my way through the Ivy League…”), I decided to head out.

There’s something to be said for local expat bars being able to put on events of this magnitude in spaces as prominent as the Galaxy, and hopefully the trend continues. Despite some rough edges with a few beers running out early, and the issue of, well, you know, the event was well received and well organized. Hopefully, even with SeeDiceGo leaving town, we’ll still be able, here in Beijing, to have nice things.

Gabe Clermont edits videos for us, including the Three Shots series. He has his own BJC business card (yes, they exist. Collect them all!). Follow him at @gabrieltrane.