Wang Yaping, Zhang Xiaoguang and Nie Haisheng were launched into space yesterday, on the eve of Dragon Boat Festival (i.e. Duanwu Jie), from the Jiuquan Satellite Launch Center in the Gobi Desert in Gansu province.

Today, to celebrate Duanwu, the crew ate zongzi – glutinous rice wrapped in bamboo leaves — aboard the Shenzhou 10 capsule. Wang, 33, China’s second woman in space, is featured in the video above showing viewers what space zongzi look like.

Nothing Qu Yuan — the ancient poet for whom the holiday commemorates — would eat, probably, but it’s the spirit that counts.

The Shenzhou 10 crew was sent off yesterday with a small ceremony and words (via satellite) from president Xi Jinping. Reports AP:

“You have made Chinese people feel proud of ourselves,” Xi told the three astronauts. “You have trained and prepared yourselves carefully and thoroughly, so I am confident in your completing the mission successfully.

“I wish you success and look forward to your triumphant return.”

We’ll see if the astronauts (taikonauts, if we’re being technical here) do anything nearly as interesting as Canadian astronaut Chris Hadfield, but the Chinese crew apparently has been inspired by Hadfield to do some talks for students once they reach the space station prototype Tiangong 1. 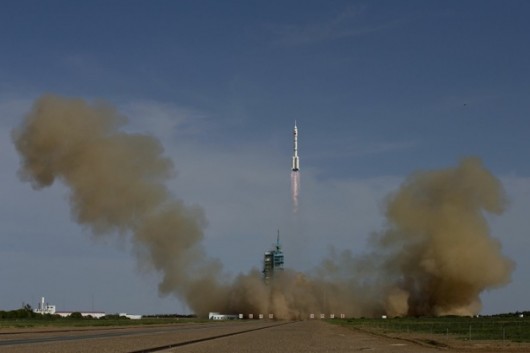