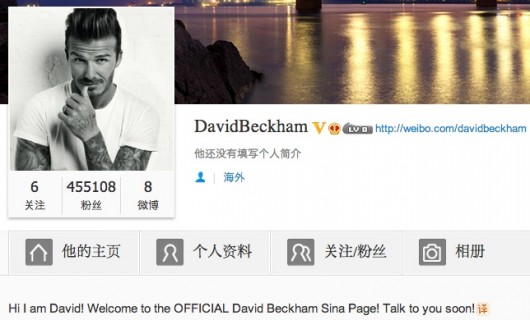 David Beckham arrived in Beijing yesterday, kicking off his second tour of China as soccer ambassador. (His first trip, in March, saw him hilariously whiff on a free kick.) The positive publicity couldn’t have come soon enough, considering the Chinese national team’s humiliating 5-1 thrashing at the hands and feet of Thailand’s youth team on Saturday. What was one of the first things Becks did?

Join Sina Weibo, of course. Check out his first post:

Hi I am David! Welcome to the OFFICIAL David Beckham Sina Page! Talk to you soon!

The man joined yesterday but already has 455,000 followers.

“Thank you for coming to Sina! Welcome! You are so cool!” wrote one Weibo user in response.

Not everyone was so friendly though.

“Even this guy can be in headlines. [There are] too many fools in China,” wrote one user.

Some fans asked the former Manchester United player for his advice on how to save Chinese soccer, which has long suffered from a deteriorating reputation.

Beckham has answered variations of that question — how to save Chinese soccer — in the past: more youth programs. Get kids to actually want to play the game. China does not seem to care about David Beckham’s advice.