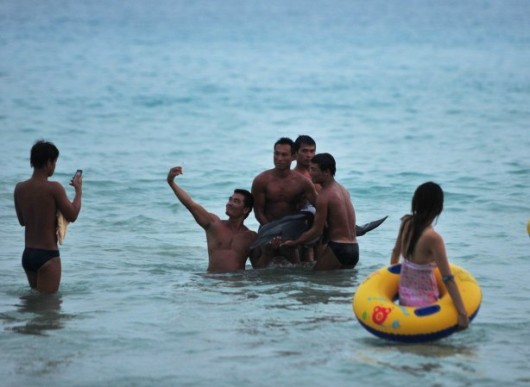 Look at these douchenozzles.

A dolphin was found stranded in a swimming zone of Dadong Sea in Sanya, Hainan province on June 16, and while waiting for animal rescues to arrive, a few swimmers decided to lug the poor creature out of the water for photos.

Do we need to identify the things that are wrong here? Should we point out that dolphins aren’t used to being manhandled like this, that it could lead to asphyxiation and death? Not to mention this one here was already suffering from a head injury.

The counterargument is that dolphins beach themselves all the time, and chances of death are probably greater if not for human intervention. In fact, just last month, on May 21, a dolphin beached itself in Sanya and died despite the best efforts of bipeds.

You would have to be somewhat of an asshole to argue this, of course. But hey, whatever. These guys here have one heck of a souvenir photo — and now they are the ones to be gawked at by uncaring strangers, since there’s now a photo of them. How appropriate.

The air-breathing mammal died around midnight at a local marine park due to excessive bleeding from the tail, reported Hainan’s news portal Hinews.cn. Experts said the dolphin might have collided with a fishing boat before it was stranded.

Instead of trying to help the distressed animal, a crowd gathered to line up for pictures. Several men lifted the dolphin, as long as a man is tall, above the water and one of them flexed his muscles for the camera. Online pictures do not show anyone trying to stop the abuse. 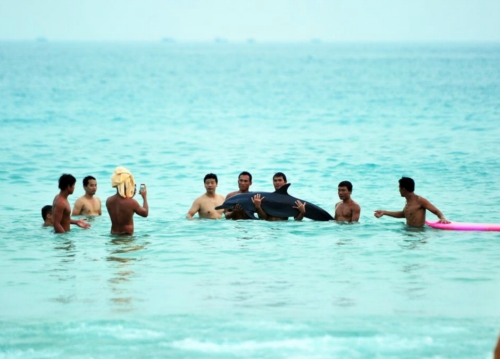 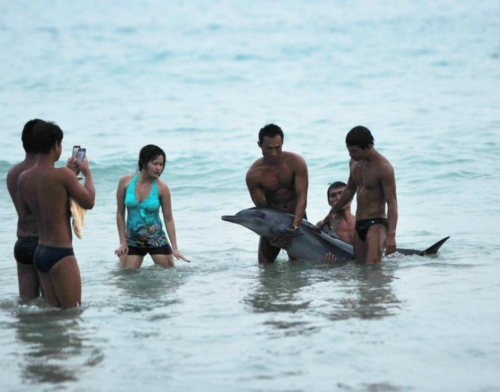 8 Responses to “Posing With An Injured Dolphin Doesn’t Make You Cool, Guys [UPDATE]”